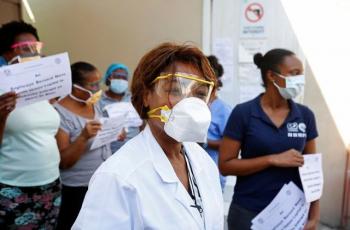 Staff at one of Haiti's top hospitals on Friday reportedly began refusing new patients after their director was kidnapped.

Dr. Jerry Bitar was taken after he left his home near the capital to go to work at Hospital Bernard Mevs, according to Reuters.

Haiti reported a substantial increase in kidnappings this year as it faces a political and economic crisis. Police discovered 15 kidnappings in January, with victims including children, lawmakers and foreign aid workers.

Large crowds banded together outside the hospital to support the release of Bitar, who runs the facility alongside his brother, Reuters reported.

"In the face of the coronavirus pandemic, it is abnormal to take the hospital's doctor," Jean Wilguens Charles, a Haitian resident whose friends have received treatment at the hospital, told the outlet. "We demand his liberation without conditions."

Claude Devil, a medical assistant for the facility, said the hospital could not take in new patients until Bitar is returned as medical staff attempt to tend to current patients to the best of their ability.

"There are several patients waiting to be operated but we cannot work without the doctors' order," he said.

The facility is not treating COVID-19 cases currently but may need to if the disease begins to spread more rapidly throughout the country.

According to the World Bank, Haiti is the poorest country in the Western Hemisphere, meaning a larger outbreak of the coronavirus could have devastating outcomes.

A 2019 study by the Research and Education consortium for Acute Care in Haiti found that Haiti possesses 64 ventilators for a population of around 11 million, greatly limiting the number of people who could seek treatment for the virus.

The government has confirmed eight cases of the virus so far, with President Jovenel Moise ordering the closing of schools, factories, churches and borders while imposing a curfew to curb the spread of infection.