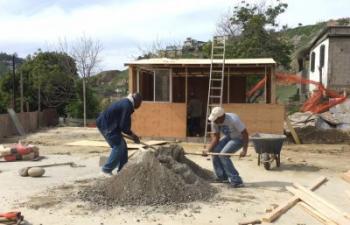 A small house goes up in Tijuana's 'Little Haiti.'

It’s a long way from Port-au-Prince to Tijuana but little by little thousands of Haitian migrants stranded in the city are beginning to feel more at home as they put down roots and even influence the local population with their food and culture.

Around 20,000 Haitians arrived in Baja California between June and December last year and although their original goal was to reach the United States, a change in U.S. government policy prevented many from gaining entry into the country.

Consequently, at least while President Donald Trump remains in the White House, some of them plan to stay in Tijuana.

A 2010 earthquake devastated the Haitian capital Port-au-Prince as well as other parts of the country and another natural phenomenon – Hurricane Matthew – also caused widespread damage in October 2016.

In the aftermath of the earthquake, the U.S. government established a humanitarian temporary protection program for Haitians but a hardening of the policy at the end of Barrack Obama’s term – aimed at deterring rising levels of migration from the country — left more than 4,000 stranded in Mexico.

After initially being housed in temporary shelters spread across the city, the migrants eventually outstayed their welcome and were forced to find alternative accommodation.

So in a poverty-stricken part of the city called Divina de Providencia — situated between two hills in the Playas de Tijuana borough — almost 2,000 Caribbean migrants have established “little Haiti.”

A nearby church where dozens of Haitians also live adds a further sense of community.

Despite the lack of electricity or running water, having to traverse a steep and windy road to get there and a constant stench coming from nearby wastewater drains and pig farms, the migrants were not deterred from establishing their settlement.

Some Tijuana businesses have also began catering to the tastes of the Caribbean migrants by offering Haitian food such as crispy fried chicken, whole black beans and rice and fried plantains.

While the majority of the migrants are men, there are also 713 women in the state, according to the National Immigration Institute (INM) and 15 babies have been born to Haitian women, making them Mexican by birth.

Other migrants have managed to find employment in construction, maintenance, in factories or as cooks but their salaries are low and so the necessity to find affordable accommodation arose.

Alcius Guy arrived in Tijuana in December and while he was unable to seek asylum in the United States, he was able to formalize his immigration status in Mexico.

But the humanitarian visa he was granted, allowing him to remain legally in Mexico for the time being, is less than perfect.

“With this permit . . . it’s legal to be in the country but you can’t work. Many companies ask for the CURP [an ID code for Mexican citizens and residents] in order to employ us so it seems that the government is doing [us] a favor but it doesn’t want to do it completely.”

He also claims that if Haitians are able to find jobs, companies take advantage of them and pay them less than Mexican workers.

He is considering forming a Haitian migrant association so that those in difficult situations can help each other.

However, an official from the INM sees things differently.

“The federal government has treated these people how we would like our fellow Mexicans to be treated in other countries. The idea is to lead by example and give the people who have been left stranded in Mexico the possibility to regularize their immigration status.”

Around 60,000 Haitians already in the United States were recently granted a six-month extension to their status although they were also told to prepare for the possibility that they may soon have to return to their native country.

While the Haitians in Tijuana are showing signs of adapting to Mexican life, their situation too remains precarious.