Ten questions to guide a reset of Canada’s foreign policy 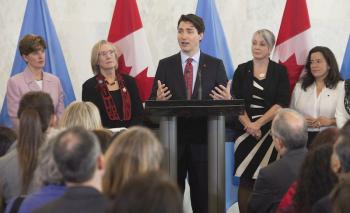 With Canada suffering two consecutive defeats in its effort to gain a United Nations Security Council seat, the time has come to fundamentally reassess our foreign policy.

Ten years ago, the Conservative government’s failure was largely explained as a rebuke of its support for the U.S. government and for mining and oil companies, as well as its anti-Palestinian policies.

The Liberal government promised change, but the world seems unconvinced.

Pro-Washington, pro-corporate policies will guarantee our irrelevance in a world struggling with economic inequality and looming environmental catastrophe. The defeat at the UN last week highlights the importance of formally reviewing Canadian foreign policy, called for by numerous prominent voices in recent days. Such a review has not taken place for 15 years.

But this undertaking can’t simply be a government affair. Nor can it be confined to the echo chamber of corporate and Department of National Defence aligned and financed think tank fellows and academics who currently dominate the discussion.

If we want to truly understand Canada’s Security Council defeat, a formal review needs to consider the positions of internationally-minded grassroots groups.

The review would benefit from considering the Hamilton Coalition to Stop the War’s campaign against Canadian sanctions policy, for instance, which harms and kills citizens in 20 countries. Or Solidarity Québec-Haïti’s opposition to Canada’s support for a repressive Haitian president. Rights Action’s criticism of Canadian mining in Central America ought to be heard, as should Independent Jewish Voices’ position on Canadian charities in Israel. This would go a long way towards democratizing our foreign policy.

While groups like these have few resources, they represent the views of hundreds of thousands of Canadians. More importantly, they reflect the perspective of millions of people around the world. As the UN defeat demonstrates, politicians from the Global South may appear unequivocally supportive of Canada in public, but when their diplomats vote in private the result suggests otherwise.

As part of the push for a foreign policy review, the Canadian Foreign Policy Institute is releasing an open letter today addressed to the prime minister calling for a “fundamental reassessment of Canadian foreign policy.” It is signed by dozens of politicians, artists and academics, from MPs Leah Gazan and Paul Manly to former MPs Roméo Saganash, Libby Davies and Svend Robinson. Other signatories include Canadian luminaries like David Suzuki, Stephen Lewis and Naomi Klein, Vancouver Coun. Jean Swanson, as well as Richard Parry of Arcade Fire and Black Lives Matter-Toronto founder Sandy Hudson.

The letter puts forward 10 questions to consider as part of a foreign policy reset:

Let’s use this moment to usher in a new era in which our government’s policies abroad reflect the desire of most Canadians to truly be a force for peace and human rights in the world.