The trial is done: BAI’s Mario Joseph on Ricardo Seitenfus’ latest book on cholera in Haiti 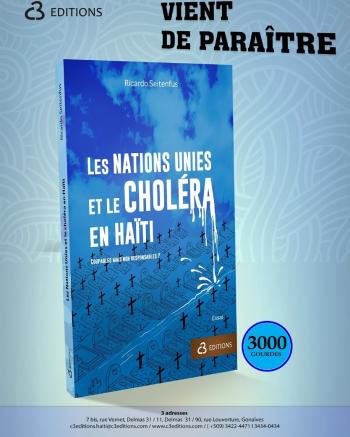 (Translation provided by the Institute for Justice & Democracy in Haiti)

The collapse of the Haitian state, following the kidnapping and/or the coup d’état on February 29, 2004, led the world’s guardian nations to consider, in the framework of the United Nations (UN), a so-called mission of peace, commonly known as the United Nations Stabilization Mission in Haiti (MINUSTAH). The experience is disastrous for the poorest country in the Americas whose entry into the concert of nations is still a case of forceps. In addition to the fact that the stabilization is ultimately a sham, it has sowed in the soil of Haiti a degrading disease caused by the bacterium “Vibrio cholerae.”

The importation of this disease into Haiti has shown that the United Nations could also be drivers of destabilization of a people mistakenly assumed to be unable to ensure the governance of their country, thus the taking charge of their destiny. It brings to light the moral and intellectual indigence of the United Nations, whose crimes dirty the soil of Haiti with impunity.

A man of remarkable integrity, Dr. Ricardo Seitenfus sounds the alarm by declaring the guilt of the global organization for the introduction of cholera in Haiti. Thus, he has rendered a historic service to the victims of cholera in Haiti, and to all those who care about international justice or who believe in the potential of the United Nations to fight against diseases and to promote human rights and the rule of law in the world. He explained, through careful research of the facts and a rigorous analysis of the applicable legal regime, that, for eight years, the institutions in charge of protecting the vulnerable populations of Haiti against the attacks of bacteria, people, and institutions have completely neglected them.

The United Nations and cholera in Haiti: guilty but not responsible, this is the title of the latest book by Dr. Ricardo Seitenfus, devoted to Haiti. In a simple and clear but very learned style, the author tackles the thorny issue of cholera, a diarrheal disease that is highly contagious due to a food-borne enteric epidemic of the bacteria.

This work is, to say the least, the most eloquent testimony of the respect due to the Haitian people and to universal awareness. Without blinking, the author recounts the importation of the disease, recognizes the UN’s desire to circumvent the truth of the laboratory and in this way avoid responsibilities by refusing to take the most basic precautions to prevent the introduction of cholera in Haiti and by cynically deploying a cover-up that has contributed to the spread of the epidemic on a national scale and has caused countless deaths, and denounces the dishonest maneuvers to bring the burden of the new leprosy to Haiti, even to corrupt the history of the country. He also highlights the legal limits of the claims of families of more than 10,000 deaths from cholera, emphasizing immunities, a sort of curtain of protection for United Nations in this case.

He also denounces the denial of justice by the United Nations, which loses credibility by denying its own laws. Philip Alston, a UN human rights expert, has sharply criticized the UN’s legal strategy as “morally inadmissible, legally indefensible and politically counterproductive.” Clearly, the United Nations played cynical tricks to avoid responsibility in the case of cholera.

The Haitian government, through four presidencies, has continually refused to take the most basic measures to support the struggle of its citizens for justice. For eight years, it sided with the UN version, thus helping to corrupt the history of the disease in Haiti and repel the noble demands for justice of the victims.

These eight years of official cynicism and indifference to the rule of law and the suffering of over a million Haitians are just part of the story. The other part is that of eight years of persistent struggle inspired by the victims of cholera and their allies in Haiti and abroad – even within the UN – to force the latter and the Haitian government to respect their ideals and accept their responsibilities.

As Professor Seitenfus so aptly points out, the struggle is not yet over, even though the cholera victims and their allies have managed to push the international community to invest hundreds of millions of dollars in the fight against cholera, to reduce the risks for vulnerable populations around the world hosting “peacekeeping” troops, and to make significant improvements in public health globally.

Every day, more and more people fall ill with this preventable disease; every week another Haitian dies. It is rare for children who have lost their parents to go to school for lack of means to cover school fees, thus preventing another generation from emerging out of poverty through education. Every day, families who have spent all the money they did not have to care for the sick or bury the dead continue to lack basic meals and health care.

The total price that cholera victims should pay going forward depends largely on the rest of us: in Haiti and elsewhere. We have privileges through instruction, we can read this book and understand more about games and issues. We can act with our political leaders, the economic class, and civil society. We have the opportunity to support the struggle of the victims and to fight it in the name of truth and justice. The more we support the cause of the victims, the sooner they will stop paying this terrible price. More promptly too, the culprit will act.

The Headquarters Agreement of July 9, 2004, despite its radical nullity for violation of Article 139 of the Haitian Constitution, must not be an obstacle to the right of access to a court. For no judge of any jurisdiction can dispense himself to judge for silence of the law.

Clearly, with this book, the trial is done. The United Nations is condemned. Many victims are waiting for reparations.