The UN’s legacy in Haiti: Stability, but for whom? 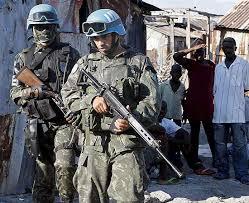 After 13 years and more than $7 billion, the “touristas” — as the United Nations soldiers that currently occupy Haiti are commonly referred to — will finally be heading home. Well, sort of. While thousands of troops are expected to depart in October, the UN has authorized a new, smaller mission composed of police that will focus on justice and strengthening the rule of law. But the UN Stabilization Mission in Haiti, known by its French acronym, MINUSTAH, is not just thousands of foreign soldiers “keeping the peace.” It is the latest and most visible manifestation of the international community’s habit of intervening in Haiti, a habit that is unlikely to change.

World powers have always had a difficult time accepting Haitian sovereignty. When a slave revolt delivered Haiti independence from France in 1804, gunboat diplomacy ensured the liberated inhabitants would pay for their freedom. For the next 150 years, Haiti paid France a ransom for its continued independence. In the early twentieth century, a new hegemonic power held sway, with US Marines occupying the country for more than 20 years.

Two hundred years after Haitian independence, when the UN Security Council created MINUSTAH, it also mandated the formation of the “Core Group,” which included MINUSTAH’s leadership as well as diplomatic representatives from foreign governments and multilateral organizations. Since its creation, the group has influenced — subtly and not so subtly — Haiti’s internal affairs, with the backing of a heavily armed military force.