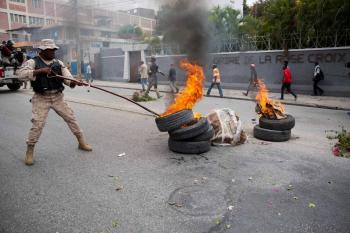 A U.N. human-rights investigation into a November massacre in a poor Haiti slum is pointing the finger at the Haitian government and raising questions about the vetting of the country’s U.N.-trained police force.

The investigation into the two-day reign of terror in the La Saline neighborhood of Port-au-Prince confirmed that at least 26 people were killed, some by axes or machetes, most by gunshots, and their bodies taken away in wheelbarrows and dumped in parts unknown. Investigators said at least a dozen people remain unaccounted for.

The massacre, the U.N. said, “raises many concerns about human rights abuses against residents of La Saline and the alleged involvement of [Haiti National Police] agents and state officials.”

Investigators noted that Haiti government officials have expressed “reservations about the figures given in terms of the number of deaths reported following the gang attack.” The head of the Inspector General’s office of the Haiti National Police, Ralph Stanley Jean Brice, also took issue with some of its conclusions.

“There were no police officers involved,” Brice told the Miami Herald. “You had two former officers who had been fired and there were no units of the police that were involved..”

Brice said police conducted two investigations into the massacre, and a third on why police didn’t intervene — a criticism raised by U.N. investigators — is ongoing. But what officers have found, he said, is there was no third police officer, pointed out in the U.N. report, and the massacre started well after dark on Nov. 13, and not at 3 p.m., as investigators said.

“It was dark. There was a blackout in La Saline and officers didn’t want to go in under those circumstances,” he said, noting that there were no police operations in the community. “Also we didn’t have enough people or equipment to stop it.”

While estimates on the number of deaths and timing of the massacre varies, investigators’ findings on how the incident unfolded are similar to those revealed in reports by two Haiti human rights organizations and the Haiti National Police, which suggested that more than 70 people should be arrested for the “reprehensible acts.”

The report, requested by the U.N. Security Council, comes as the U.N. prepares to end its peacekeeping mission in Haiti in October after 15 years and the country sees a recurrence in deadly gang violence and is undergoing a political crisis. Opposition parties, citizens’ groups and business and religious leaders are demanding the resignation of Haitian President Jovenel Moïse following his implication in a corruption scandal involving the mismanagement of billions of dollars in savings from the PetroCaribe oil program. Moïse has professed his innocence and said he will not resign.

On Friday, the Haitian Superior Council of the Judiciary became the latest to comment on the recurring violent protests and anger sweeping the country. In a letter signed by four of its six judges, the high council of judges and prosecutors called on Moïse to “do a profound analysis of the gravity of the situation” and act in the interest of the nation. Members of the council sit on the country’s supreme court.

U.N. investigators say at least five armed gangs fighting for control of La Saline and disguised as Haitian police specialized forces conducted the “well-planned” attack on Nov. 13 and 14 against La Saline residents, who were “allegedly targeted for alleged affiliation to opposing armed gangs.”

Witnesses told investigators that after gangs took control of the area, the president’s representative for the West region, Richard Duplan, arrived. The report says he was joined by three police-officers-turned-gang-leaders, Jimmy Cherizier, alias Barbecue; Gregory Antoine, alias Ti-Greg and Gustave, alias Chupit. Duplan then reportedly turned to the gang leaders and said in Creole: “Nou touye twop moun, se pa misyon sa yo te bay nou” (You killed too many people, that was not your mission).

“The allegations against the Departmental Delegate of the West — if proven — would indicate that this official was aware of the preparation for the attack, and that he was directly related to the gang members with whom he interacted during the attack, execution of the operation, with the assistance of the above-mentioned police officers,” U.N. investigators said about Duplan. “The allegations raise the possibility of a complicity between gangs and state authorities.”

Of the 70 individuals the police suggested be held accountable for the violence, criminal complaints have only been filed against 14 by the chief government prosecutor. Of them, 11 are currently in jail in Haiti awaiting trial on charges of murder, armed robbery, criminal conspiracy, illegal possession of firearms and arson. Duplan is not among them..

U.N. investigators say the lack of intervention by the police during the attack, which lasted several hours, allowed the attackers to act with impunity “and contributed to the very high number of victims.“

The fact that two police officers who had already been investigated by police internal affairs for previous human rights violations were among the perpetrators raises “serious concerns about the vetting of the security forces, and the capacity of the justice system to take action against those responsible for human rights violations,” the U.N. said.

“The alleged presence of the departmental delegate and agents of the [Haiti National Police] suggests a possible implication of these representatives of the State in the events,” investigators added.

To launch their attacks, investigators said, gang members dressed as police officers from BOID, a specialized Haiti National Police unit. The unit was created in 2015 under former president Michel Martelly over objections within Haiti’s U.N. mission and the U.S. Embassy in Port-au-Prince, which feared it could become a rogue force.

The U.N. considers most of the 15,000 officers who serve in the Haiti National Police as law-abiding and serving the country’s 11 million citizens. However, numerous human rights violations concerns have been raised about the BOID unit and National Palace specialized units, which fall under the control of the presidential palace.

The issue of who is and who isn’t a police officer was raised days after the La Saline attack, as Haitians denounced hooded men dressed in black uniforms during a Nov. 18 protest. The men were carrying M60 machine guns and roaming around the capital aboard pickup trucks belonging to the National Palace guards, covered with camouflage paint.

Haiti Police Chief Michel-Ange Gédéon later publicly distanced himself from the National Palace guard unit, saying it is not under his control and had no authority to deploy during protests.

The U.N. report’s revelations show the fragility of the Haiti National Police and its vulnerability to infiltration and politicization just as the U.N. Security Council is preparing to close its peacekeeping mission. The global body, the U.S. and Canada have invested millions of dollars in rebuilding the police force since the U.N. returned to Haiti in 2004 amid a bloody coup.