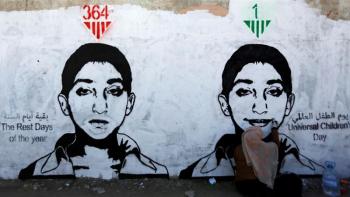 CHIP Editor's note: The Canadian government has approved the sale of millions of dollars worth of arms and military vehicles to the Saudi government. These weapons and vehicles have been used in the Saudi-led war in Yemen.

A Saudi-led coaltion was responsible for more than half of child deaths and injuries in war-torn Yemen last year, according to a new United Nations report exclusively obtained by Al Jazeera.

The annual Children and Armed Conflict report, which shines the spotlight on child victims around the world, found that a total of 1,316 children were killed and maimed in the Arab world's poorest country in 2017.

Saudi Arabia, together with several other Arab nations, launched a military campaign in 2015 in support of Yemen's internationally recognised government, aiming to roll back advances made by Houthi rebels after they overran much of the country in 2014.

Most countries have since withdrawn their forces from the US-backed coalition, with only Saudi Arabia and the United Arab Emirates conducting attacks in Yemen.

The UN report was compiled by the staff of Secretary-General Antonio Guterres and submitted to the Security Council on Monday night.

The Houthis were responsible for 83 children killed and 241 wounded; the pro-government Popular Resistance group for 41 casualties;  other international forces fighting for Yemen's government for 19 casualties; al-Qaeda in the Arabian Peninsula (AQAP) for 10 casualties; and the Yemeni Armed Forces, among other parties, for four casualties.

Fifty-one percent of the total 1,316 casualties were caused by air attacks, the report said.

The second leading cause was ground fighting, including shelling and shooting (136 killed, 334 injured), followed by explosive remnants of war and mines (27 killed, 119 injured).

The report also accused both the Houthis and forces from the Saudi-Emirati coalition of recruiting 842 cases of child soldiers - some as young as 11 years old.

Most of the children were aged between 15 and 17, and nearly two thirds of them (534) were fighting in the ranks of the Houthi militia group.

Child soldiers were also used by the Yemeni armed forces (105) and the Security Belt Forces (142), a militia recruited by the UAE.

Child soldiers were mostly used to guard checkpoints and government buildings, patrol, or for fetching food and water and bringing equipment to military positions. The number of combatants fighting for different parties was 76.

The report includes an addendum that names the groups and parties that are responsible for the killing and wounding of children.

Speaking from the UN headquarters in New York, Al Jazeera's diplomatic correspondent James Bays said that the report includes condemnations of lots of different armed groups and some governments.

"What is most notable is that the Saudi-led coalition is listed as one of the parties that commit grave violations affecting children in situations of armed conflict," Bays said.

"Saudi Arabia fought very hard not to get listed last year, and they came up with this caveat that they're putting measures in place to try to change the situation to protect children.

"That does beg the question though, [if] for two years running they've improved the protection of children, why are they still killing them?"

The other country that fought not to be on the list and succeeded is Israel, but Bays said it wasn't clear whether that was the result of a combined Israeli-US pressure.

"Fifteen children were killed by Israeli security forces in 2017 but Israel does not significantly get a listing as one of those parties that should be put in this blacklist," he said.

Besides Yemen, the report also said that the number of verified cases of the recruitment and use of children in Somalia (2,127), South Sudan (1,221), the Syrian Arab Republic (961) persisted at alarming levels.

In countries like the Central African Republic, the recruitment of child soldiers quadrupled to 299 compare with 2016, with 196 boys and 103 girls affected, some as young as 8 years of age.