Worker's in the streets again! 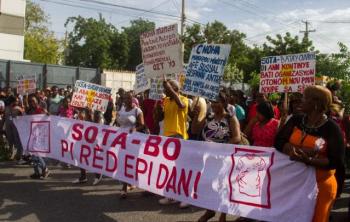 The workers in Port-au-Prince’s assembly industries have not given up. Under a blazing sun, alternating with heavy rain, surrounded by heavily-armed police units, Haiti’s working class took to the streets to continue demanding that the minimum wage be increased to 800 gourdes ($12.71) per day.

After a few days of truce, broken promises by state authorities, police violence, and despite firings, blackmail, and pressure from the bosses, several thousand workers again took to the streets of the capital on Mon., Jun. 26 to demand a salary hike and better working conditions in factories.

Chanting slogans hostile to the bosses and the government, armed with tree branches and placards, demonstrators from across the metropolitan area demanded a minimum daily wage of 800 gourdes ($12.71) and social services because of the increased cost of living and fuel prices in Haiti.

"Social services mean subsidizing the food, rent, transportation, and education of the workers' children,” said Dominique St-Eloi, General Coordinator of the National Central of Haitian Workers (CNOHA). “We talked to the Social Affairs Minister, who lied to us. He promised buses, and a subsidy of food and rent. Yet nothing has been done."

"We are going to work for the reintegration of more than 40 people who have been fired," he added.

The protestors, mostly young women, danced and pranced to the rhythm of well-known Haitian traditional songs. They also denounced certain people who claim to be workers' representatives on the government’s Higher Council on Salaries (CSS), an entity charged with working on adjusting Haitian workers’ minimum wage.

"With this life that is increasingly expensive for us, we workers find ourselves unable to take care of our family with 300 gourdes ($4.76),” complained Luc Léon, 50, a worker and a trade unionist. “Transport costs and the prices of basic necessities have increased. We have to pay for rent and the schooling of our children. We demand 800 gourdes. This salary cannot solve our problems, but it will help us more or less."

He chastised the behavior of authorities who have led them astray. Behind him, protestors chanted for 800 gourdes at the top of their lungs. "Sometimes I manage to support myself through the support of friends and family," said Judith Joseph, 30, mother of two children. "We cannot do anything with 300 gourdes.”

On this turbulent morning, among the workers’ many chants were: “We are paid on Saturday, and by Monday, we are already dry" and “The agents of the CIMO (Company for Intervention for the Maintenance of Order) are in the pay of Baker (a boss)." The placards read, "CNOHA demands that assembly factory owners respect the fundamental conventions of the International Labor Organization (ILO)".

Former presidential candidate Moïse Jean Charles of the political party “Dessalines, Children,” dressed in red shirt, came out to support them. According to the Pitit Dessalines leader, "the 800 gourdes demand is not negotiable". In this carnival atmosphere where music rhymes with protests, the demonstrators say they are determined to continue taking to the streets until their demands are met.

The march began not far from the Port-au-Prince Industrial Park (SONAPI), then wound along the airport road to the Nazon intersection, along Martin Luther King Avenue, down Lalue and Bois Verna to reach Charles Sumner Avenue for a rally in front of the Social Affairs Ministry, where organizers delivered a special message to authorities.

The protesters were called out by trade union organizations such as the National Central of Haitian Workers (CNOHA), Union Platform of Textile Factories - Batay Ouvriye (PLASIT-BO), and the Trade Union Confederation of Textile Workers of Assemblage for Re-exportation - Confederation of Workers of the Public and Private Sectors (GOSTTRA-CTSP).