2021: Uprising in the Islands of Guadeloupe and Martinique 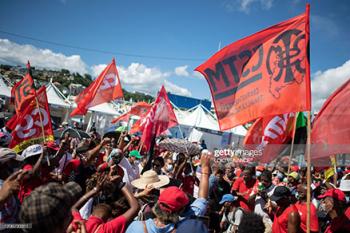 Guadeloupe and Martinique are officially French territories, but they are colonized in the truest sense of the word. Recent protests are a result of years of inequities meted out to their majority Black populations.

“The [French] state clearly has the intention to leave Guadeloupe in a morass.” Elie Domota, LKP leadership, 12/3/21

Over the month of November, 2021, a wind of revolt swept across the “overseas territories'' of Guadeloupe and Martinique. If one was to follow the mainstream media, French or otherwise, the discontent was triggered by mandatory vaccination requirements for health workers, restaurant workers and firefighters implemented by the French government on all French territories, including colonies. As a consequence, about 566 workers found themselves suspended from their jobs for refusing to comply. These workers found themselves deprived of their means of subsistence and unable to access benefits to which even unemployed workers are entitled. Moreover, alongside these suspensions, hospital and health services were closed across the territory.

The LKP or Liyannaj Kont Pwotiasyon (the Collective Against Overexploitation) is an organization of about 50 groups fighting: “against the exploitation of the island and against all the injustices that may take place there. It also generally denounces all the residues of colonialism that can take place everywhere in the world, especially on the African continent or in other French islands and overseas territories.” On the 12th of November, the LKP called for a general unlimited strike throughout Guadeloupe to begin on November 15. As the movement began, people took to the street, demonstrating, erecting roadblocks and barricades, and confronting the police, seriously compromising the daily functioning of the Island. As tension increased, police found themselves under attack by various projectiles and even bullets, after some people supposedly broke into an armory. By the 22nd of November, E. Macron, president of France, declared the situation in Guadeloupe “explosive.” By then, six union organizations had called for a general strike in Martinique. On the 21st of November, it was reported that the French interior minister, G. Darmanin, announced that Paris was sending 50 elite police (GIGN and RAID units) to quelch the “violence” on the island.  In the last week of November, the tensions steadily increased, with Paris responding with 70 more GIGN and RAID soldiers on the 29th. At the same time, union activism started to spread to other territories of French Guyana and Polynesia.

As usual, the call for “order” prevailed over the demands of the LKP, and the French government, as it has always done when confronted with popular will, demanded a restoration of order before any dialogue could occur. As everywhere else, reports of crimes, looting, endangerment to police officers became the main issues from the perspective of the French authorities and their media.  Eventually, The French government conceded to postponing the mandatory vaccination to the 31st of December. As S. Lecornu, the minister to overseas territories, later visited the Island, his positions both failed and surprised many. Indeed, while trying to divide the collectives from Guadeloupe from those of Martinique, demanding that the LKP condemn the so-called violence, the French minister introduced the idea of a different status for the Island and alluded to a possible “autonomy .”

If the anti-COVID-19 measures taken by the French government ignited the powder keg in Guadeloupe and Martinique, the powder keg was certainly already filled to the brim. The inequalities between Metropolitan France and its Caribbean colonies are quite striking and those keep fueling the anger. The price of a shopping cart in these colonies is 40% higher (INSEE, 2016) than in France and up to 42% for basic food while household incomes are lower than those of mainland France. In Guadeloupe, the median income is 15,770 euros, well below the French average of 21,650 euros. F. Flemin, general secretary of the Guadeloupean Communist Party (a party independent from the  French Communist Party), explains that 40 to 45% of Guadeloupeans live below the poverty line, a line much lower than that of Metropolitan France, and that 61% of people under the age of 25 are unemployed. Moreover, in the health sector, the state of the University Hospital Center is deplorable. With only 35 ICU beds, it is under equipped and poorly kept. According to Flemin, the absence of health policy has been plaguing Guadeloupe for years in regard, for example, to diabetes, which is rampant on the islands. He explains that a 2007 law on sugar levels is still not implemented due to a lack of decree and the pressures exerted by the food industry lobby. Furthermore, in 2020-2021, the infant mortality rate in Martinique is one the highest among all the French territories, including that of France, and illiteracy rates are also very high among children who leave school today.

The medical and sanitary concerns are not new to the islands as more than 90% of people in Guadeloupe and Martinique are contaminated with chlordecone.  Chlordecone was a pesticide first used in 1972 on banana plantations on both islands. Considering the substance a probable human carcinogen, chlordecone was banned by the United States in 1976 and in 1979 by the WHO. France did not ban the pesticide until 1990, and a governmental exemption allowed its use until 1993. The substance has poisoned soil, groundwater and much of the Islands’ vegetation. It has been associated with liver problems, premature birth and increased risk for prostate cancer. A study by the National Institute for Health and Medical Research (France) has shown that between 2007 and 2014, the incidence rate of such cancer was twice as high in the islands than it is in mainland France. In 2019, E. Macron called this situation scandalous, recognizing the state’s responsibility, yet he suggested at the same time not to call the toxic substance “carcinogenic.” This certainly revealed for most the contempt of the French president towards Guadeloupeans and Martiniquais.

In contradistinction to Paris’ concerns with social order and safety of its police forces, all in all, this recent uprising (among prior revolts) must be interpreted as an expression of the people’s anger with “the reality of a country maintained in a rent economy, without any real economic development and which undergoes dual capitalist and colonial exploitation. This explains the permanence of these struggles” according to F. Flemin.

Guadeloupe and Martinique remain mired in the reproduction of a colonial system. As a French political scientist perfectly explained to the mainstream media, “the imprint of these centuries of colonization is still present. […] Inequalities are erected as principle” (F. Verges, 2021). Indeed, throughout the Caribbean, the issue of racism has always been at the heart of prior social protests and remains so to this day. Furthermore, private interests, mostly of French companies or companies owned by the descendants of French settlers continue to prevail over the interests of the people.

The French government keeps insisting on treating Martinique and Guadeloupe in the same way as any other administrative structure within mainland France, refusing to acknowledge the historical, social and cultural differences of the Islands. Accordingly, the colonial structure remains in place even though slavery and colonial exploitation proper are supposed to have been abolished.  Inequalities, injustice, and racism persist. In light of history and the obstinacy of the French governments to ignore the Islands’ right to self-determination, the anger we are witnessing today, to say the least, is, no doubt, justified.

Philippe Gendrault, Ph.D. is a mental health provider committed to the anti-racist, anti-imperialist struggle for social and political justice.