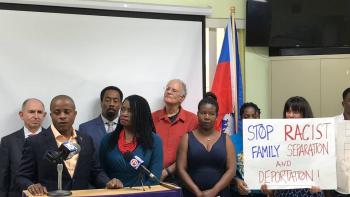 Haitian and immigration activists are asking the Trump administration to reconsider its plans to end a family reunification program that expedited entry into the U.S. for Haitians eligible for green cards. If it does not, they are vowing to go to court.

“The Haitian Family Reunification Program is a good program. It helps Haiti. It has helped those who have been waiting to be reunited with their families in the U.S. for years,” said Marleine Bastien, executive director and founder of the Family Action Network Movement, previously known as the Haitian Women of Miami. “We will use every tool at our disposable to make sure that this policy remains intact.”

Earlier this month, the U.S. Citizenship and Immigration Services announced its intention to end the Haitian Family Reunification Parole program. Modeled after a similar program for Cubans, the program was created in 2014 by the Obama administration to help eligible Haitian family members of U.S. citizens who are already approved for a family-based immigrant visa but who are still living in Haiti.

At the time, advocates and lawmakers on both sides of the aisles argued that many Haitians had been waiting as long as 12 years to join U.S. citizen relatives, and they could better help their homeland rebuild after the 2010 Haiti earthquake if they were paroled into the U.S. while they await their permanent residency status.

So far, 8,302 Haitians have benefited from the program, including Roseline Desruisseaux, who while pleading with President Donald Trump during a Wednesday press conference to not end the program, said she has a sister in Haiti still waiting to be reunited in Miami with their mother, who is a U.S. citizen.

“The program operates by invitation only,” said Steve Forester, the immigration policy coordinator for the Boston-based Institute for Justice & Democracy in Haiti, who was among several community leaders at the press conference. “Trump really killed this program immediately after taking office. Why? Because the last batch of invitation to people to apply for the beneficiaries to come here was issued in June 2016.”

Joined by current and former Haitian-American elected officials, Forester said the immigration decision was another example of the Trump administration’s efforts to curb immigration by black and brown immigrants. Other examples cited by advocates include the administration’s rollback of Temporary Protected Status, or TPS, for more than 300,000 immigrants and last year’s decision to end Haiti’s participation in the guest worker program. The federal H-2A and H-2B guest worker program benefited Haitian farmers and laborers seeking to come to the U.S. as temporary, seasonal workers.

Kurzban is among several lawyers who are suing the Trump administration over its TPS decisions. Earlier this year, a New York judge, accusing the administration of being motivated by politics and not facts, ruled in favor of Kurzban’s legal team and blocked the U.S. Department of Homeland Security from forcing Haitians to return to Haiti by ending their TPS.

On Wednesday, as Kurzban and others accused the administration of once more trying to separate Haitian families, immigration lawyers for TPS holders were once again in court, this time in San Francisco at the Ninth Circuit Court of Appeals. There the government was trying to lift a temporary injunction first issued by a California judge, blocking it from forcing immigrants from Haiti, El Salvador, Nicaragua, Sudan, Honduras and Nepal to return home by ending their TPS.

As a result of the court injunction, the Trump administration announced in February that it would extend TPS for Haiti and three other countries until January 2020.