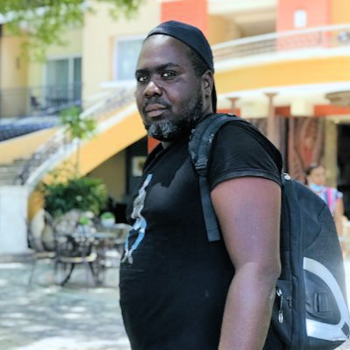 Everyone at Haïti Liberté, as well as Mint Press News journalist Dan Cohen and I working on the upcoming documentary film “Another Vision,” are devastated by the murder of our collaborator John Wesley Amady, the film’s principal Haitian cameraman and an intrepid journalist for the newspaper. He was only 30 years old.

The gang of Jean Mensatto Petit alias «Toto Borlette » killed Amady and Wilguens Louissaint, according to a compelling account by Wilmann Vil, a journalist who became separated from the pair when crossing Toto’s territory in Laboule 12 and later listened to their execution over the phone.

Born in Aux Cayes, he was the only child of Claironne Salomon, 57, who was recently hospitalized with hypertension. In late December, Amady had dropped several projects he was in the midst of to rush back to Aux Cayes to tend to her in the hospital.

Haitian journalist Jeremie Dupin, who worked with Amady in several projects for foreign networks, has organized a Go Fund Me campaign to raise money for funeral costs and grieving family members. The campaign has so far raise $8,720 towards its goal of $20,000.

Amady was a brave and gifted journalist, dedicated to Haiti’s democratic struggle. His tragic death leaves a giant void in our hearts and team.