Amid superpower rancor, MINUJUSTH renewed for another year 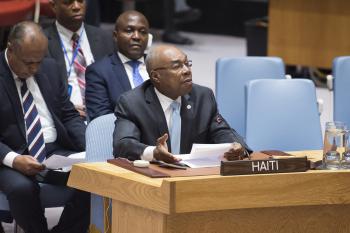 Haiti’s Permanent Representative to the UN, Denis Régis, complained that “my delegation deplores the fact that the remarks delivered through members states of the [Security] Council have not been taken into account.” Credit: UN Photo

Growing international tensions between the United States, on one hand, and Russia and China, on the other, spilled into the hushed, carpeted inner sanctum of the United Nations Security Council on Tue., Apr. 10 when the 15-member body voted on whether to renew the United Nations Mission for Justice Support in Haiti (MINUJUSTH).

MINUJUSTH, whose mandate was due to expire on Apr.15, was renewed for another year, supposedly for the last time. But for the first time in 19 votes over the past 14 years that UN military and police forces have been deployed in Haiti, the vote was not a unanimous “yes.”

This year, China and Russia abstained. If either one of them had voted “no,” it would have been a veto of Security Council Resolution 2410 since both are permanent Security Council members. Only three other nations – the U.S., England, and France – hold permanent member status and veto power.

Meanwhile, Haiti’s Ambassador to the UN, Denis Régis, complained that “my delegation deplores the fact that the remarks delivered through members states of the [Security] Council have not been taken into account.” President Jovenel Moïse’s government wanted the MINUJUSTH mission to be classified as a mere “technical assistance mission.” In reality, MINUJUSTH’s 1,193 police officers deployed in all of Haiti’s 10 departments are an armed occupation force deployed under the UN Charter’s Chapter 7, to “preserve international peace and security.” In other words, the UN Security Council still runs the show in Haiti.

Security Council Resolution 2350 of Apr. 13, 2017 says that “MINUJUSTH shall be mandated to assist the Government of Haiti to strengthen rule of law institutions in Haiti; further support and develop the HNP [Haitian National Police]; and engage in human rights monitoring, reporting, and analysis.”

In short, it is a supervisory body which puts its agents in police stations throughout Haiti and has established 11 “benchmarks” which Haiti must meet to win “the transition to a non-peacekeeping United Nations presence in Haiti.”

These benchmarks, laid out in a Security Council meeting on Apr. 3, 2018 by Jean-Pierre Lacroix, the UN’s Under Secretary General for Peacekeeping Operations, include overhauls of the judicial, prison, and police systems, as well as complying “with international human rights obligations,” demonstrating “increased capacity to fight corruption,” and establishing a “Permanent Electoral Council... through a credible and transparent process.”

It is almost certain that Jovenel Moïse’s government will be unable to meet any of these conditions. Already, it has already clashed with MINUJUSTH’s chief Susan D. Page, who in February criticized the government’s failings on corruption and human rights. In retaliation, the Haitian government recalled its UN Ambassador and cancelled its participation – and Moïse’s keynote address – at a high-level UN retreat on combating cholera (which UN troops brought to Haiti). It was unprecedented and telling that Lacroix, instead of the Page, delivered last week’s report to the Security Council.

But the fact remains that Haiti should not have the UN meddling in what are its internal and sovereign affairs.

In fact, the Security Council’s deployment of troops and police into Haiti since Feb. 29, 2004, following the coup d’état against and kidnapping by U.S. Special Forces of President Jean-Bertrand Aristide, was never justified. Haiti has never in the past 14 years been at war with any other country or a threat to “international peace and security,” as outlined in Chapter 7 of the United Nations Charter.

The United States, France, and Canada have simply used UN troops and police – first with the UN Mission to Stabilize Haiti (MINUSTAH) from 2004 to 2017 and now with MINUJUSTH – as a low-cost military alternative to suppressing Haiti’s revolutionary movements and dictating Haiti’s political and economic agenda.

Llorentty Solíz led a Security Council delegation to Haiti last June when he was the body’s president. “During the Security Council’s mission to Haiti last year, both the president of Haiti, members of the Haitian parliament, various representatives of civil society expressly asked that the mandate come under Chapter 6 of the United Nations charter,” he told the Miami Herald. Chapter 6 stipulates that countries resolve problems through “peaceful means of their own choice.”

Russia sided with Haiti and Bolivia in castigating the U.S. push to maintain control over Haiti by pushing the Security Council’s Chapter 7 military prerogative.

"I would like to ask supporters of this approach, how did the situation with human rights change in a country where there has been no armed conflict for a long time so that it suddenly became a threat to international peace and security?" asked Dimtry Polyanskiy, the first deputy permanent representative of the Russian Federation.

In past years when mandate renewal rolls around, the U.S. and China have sometimes wrestled over Washington using the UN as a proxy in Haiti, which is among the mere 19 UN member states (out of 193) which maintain diplomatic relations with the renegade Chinese province of Taiwan (which calls itself the Republic of China). To assuage the Chinese People’s Republic, in 2009, the U.S. made a deal for Chinese troops to take part in MINUSTAH, the closest Chinese troops had ever been stationed to the U.S. mainland. The Chinese saw this as a move to squeeze out and diminish Taiwan, as well as to project Chinese power and influence into the Western Hemisphere.

Nonetheless, China and Russia abstaining from the MINUJUSTH renewal is a clear message to Washington that they are not going to continue tolerating its “peace-keeping” games if it is acting aggressively with them.

In recent days, the U.S. has been toughened its rhetoric and posture against Russia over a dubious alleged chemical weapons attack in Syria and a mysterious poisoning of a former Russian spy in England. At the same time, the Trump administration has threatened to impose tariffs on Chinese imports, and the Chinese have threatened counter-tariffs.

The Haiti vote augurs that further abstentions, and possibly vetoes, lie in the near future of the Security Council, which has never asserted its authority over the world’s genuine, greatest threat to “international peace and security”.... the United States government.