'Another attempted coup': US rebuked for 'absurd' drug trafficking charges against Venezuela's Maduro 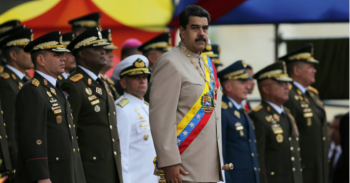 The U.S. Department of Justice on Thursday announced charges of international drug trafficking against Venezuelan President Nicolás Maduro, a move that was immediately denounced by progressives as a cynical Washington attempt to overthrow the Latin American leader as the coronavirus outbreak spreads around the world.

"This is just another attempted coup against Maduro," tweeted CodePink.

"I am old enough to have seen this one before," said veteran media critic Peter Hart, making a likely reference to former Panamanian ruler and CIA asset Manuel Noriega, the last Latin American leader charged with drug trafficking, who the U.S overthrew in 1989.

DOJ is accusing Maduro of trafficking cocaine around the Americas and into the United States.

The indictment, returned by a grand jury in New York, accuses Maduro of conspiring with a hard-line faction of the Colombian rebel group known as the Revolutionary Armed Forces of Colombia to ship vast quantities of cocaine to the United States.

"Let's be real: the $15 million 'reward' for info leading to President Maduro's capture or conviction is nothing but a bribe and incentive for members of his inner circle to defect  & provide affirming info regardless of accuracy," tweeted Grayzone reporter Anya Parampril. "An absurd demonstration of Washington's gangsterism."

Observers noted the timing of the announcement coming as the both countries—and the rest of the Western Hemisphere—brace for the impact of peak coronavirus outbreak.

Intercept journalist Jon Schwarz wryly noted the longstanding history of drug trafficking in Latin America and the U.S. in a tweet about the charges.

"I wouldn't be at all surprised if Nicolás Maduro is mixed up with drug trafficking," said Schwarz. "I mean, so was Ronald Reagan."