Another somber February 7 in Haiti 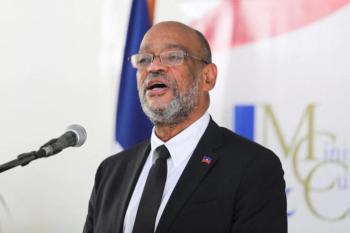 On Feb. 7, de facto Prime Minister Ariel Henry said he intends to stay in power until his government holds elections at the end of 2022.

Feb. 7 marked the 36th anniversary of the Duvalier dictatorship’s 1986 fall as well as the seven month mark since the Jul. 7, 2021 assassination of Haitian President Jovenel Moïse.

The day had no major celebrations, protests, or violence, as some had expected, but suspense is growing beneath an anxious pre-storm calm as de facto Prime Minister Ariel Henry’s government faces sharpening challenges from rival political coalitions and growing revelations about his alleged connections to Moïse’s murder.

On the anniversary, the Center for Economic and Policy Research’s Jake Johnston put out an in-depth report on and review of the events surrounding the assassination, as well as its evident connections to the aborted “coup” of Feb. 7, 2021, when a collection of Haitians were apparently duped into participating in what they thought was a U.S. government-sanctioned arrest and removal of Moïse from power. Johnston revealed that much of the ruse was perpetrated by Philippe Markington, a well-connected and persuasive Haitian con-man who has been imprisoned in Haiti since 2014 on suspicion of involvement in the April 2000 murder of radio journalist Jean Dominique, as well as Chantal Saintime, the mother of Markington’s 21-year-old daughter. Over a cellphone from his prison cell, Markington, according to Johnston, fooled various highly-placed Haitians, including Haitian National Police (PNH) Inspector General Marie-Louise Gauthier, into thinking that he was former U.S. State Department official Daniel Whitman, who had worked in Haiti in the early 2000s.

The CEPR piece also points to the many mysteries still surrounding the crime, particularly who masterminded it. “The investigation into Moïse’s assassination continues to hang over Haiti’s political class like the sword of Damocles,” Johnston concludes. “The one thing that could resolve it is the truth, an investigation in Haiti that goes beyond the surface and probes the political and economic elite, as well as the role of foreign governments.”

The next day, CNN reported that in September 2021 an elite Haitian undercover police unit narrowly missed ambushing and arresting fugitive Joseph Félix Badio, the man the PNH believes ordered Moïse’s murder. Badio was going to meet with Ariel Henry at his residence. The cops also planned to subsequently arrest Henry. But the meeting never happened, because the two men had been tipped off, CNN was told.

“Henry is at the center of everything,” one investigator told CNN. “All he has done since taking over as PM is obstruct (the investigation) and fuck us over.”

CNN also obtained a secretly made recording from November of investigative judge Garry Orélien, who has since resigned, saying that he believes Henry is complicit in the assassination and the cover-up.

“Do you think I can touch Ariel (Henry) now?” Orélien said on the recording that CNN obtained. “How can I do that? I won’t be able to give (any order to indict him), it won’t see the light of day.”

Such scandalous revelations are fueling the hopes of groups in the Montana Accord coalition that they can soon supplant Henry’s government with one they have devised.

“Ariel Henry doesn’t have any legitimacy or credibility to govern,” CNN was told by James Beltis, president of the Montana Accord’s Transition National Council (CNT), which has proposed Fritz Alphonse Jean, a former head of Haiti’s central bank, to be president and former senator Steven Benoit to be prime minister. “His positions might send us to a deeper crisis.”

The Montana Accord coalition (named after the Montana Hotel where it was founded on Aug. 30) in January reached a “consensus” with a rival coalition, the Protocol for a National Entente (PEN) headed by former senator and former Haitian Bald-Headed Party (PHTK)-ally Youri Latortue, to set up a two-year transition that would be overseen by a five-member presidential junta, of sorts. Under the Montana/PEN agreement, Montana’s nominee (Fritz Jean), would join one nominated by PEN, one by Ariel Henry’s governing coalition (which includes lawyer André Michel’s Popular and Democratic Sector and the social-democratic party Fusion), and two by the “private sector” i.e. Haiti’s infinitesimal and close-knit bourgeoisie. (Curiously, the Montana/PEN consensus does not specify what bourgeois bodies – like the Haitian Chamber of Commerce or Association of Industries of Haiti – should do their nominating.)

To date, Jean is the only presidential nominee. The other sectors have not made a peep, not even PEN, auguring trouble for the deal.

In his Feb. 7 speech, Henry said that he would remain in power until elections are held at the end of the year but would continue to dialogue with groups like the Montana coalition. At the same time, he gave them a warning. “No one has the authority or the right to meet in a hotel or abroad to decide in small committees who will be President or Prime Minister,” he said. “All this is a distraction […] The situation of the country is too serious to play musical chairs at the head of the State.”

Henry concluded by saying that “we are moving forward with those who want to solve the problem of insecurity, set up a credible CEP [Provisional Electoral Council], and organize a popular consultation to validate the new Constitution…. We will organize good elections so that we can quickly hand over the leadership of the country to the Haitian people who have the right to choose freely at all levels.”

A few hours later, Sen. Joseph Lambert, President of the Senate, whose 10 (out of 30) senators are Haiti’s only remaining elected officials with terms that, by some calculations, did not end in January 2022 but will run until January 2023. He gave a televised speech in which he accused Henry of operating “on the fringes of all legality” in that “power [has been] seized by the Prime Minister” but he “has not managed to exercise it” and “is unable to say what his mandate consists of” and is “therefore, unable to prepare and organize good elections.”

Accordingly, Lambert announced that at the end of the week the Senate is convening a “consensus congress” to which all the rival political coalitions (Montana, PEN, one formed at a  “Louisiana Summit” last month, etc.) as well as Henry would be “officially invited.” Lambert recently has worked in close political concert with his former colleague Youri Latortue, and “both [men] are widely believed to be involved in illegal activities,” the U.S. Embassy wrote in a 2006 confidential cable obtained by the publisher Wikileaks.

“What’s going on in Haiti is partly a result of bad U.S. foreign policies, of decades of supporting incompetent and corrupt leaders, and the U.S. is still contributing to creating worse conditions right now,” Marleine Bastien, the leader and founder of Miami’s Family Action Network Movement (FANM) told Time Magazine. “The most powerful nation in the world is not only taking very little action, but making things worse.”