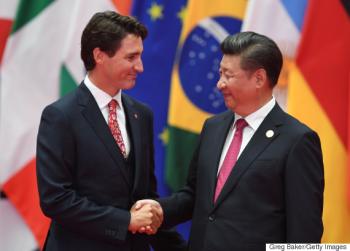 The anti-China panic sweeping Canadian politics has descended from tragedy into farce.

Reguly succeeded in stirring a national security scare about minerals extracted 10,000 kilometres from Canada. Since he published “The West is asleep while China hoards key minerals” on December 18 the opposition parties have repeatedly criticized the Liberals for failing to conduct a “national security review” of the Neo Lithium sale. Conservative leader Erin O’Toole called it “critical” to review the purchase of Argentinian resources by a Chinese firm while NDP MP Charlie Angus tweeted, “How is it possible that Ottawa gave the thumbs up to a Chinese takeover of Neo Lithium? This is a critical metal for the renewable economy. There is a major geopolitical fight for control of these minerals and Canada is being left on the sidelines.”

Opposition MPs forced Innovation, Science and Industry minister François-Philippe Champagne to explain the lack of review before a federal committee. At the industry and technology committee meeting a senior fellow with the Macdonald-Laurier Institute demanded a review of the sale. In all seriousness Jeff Kucharski claimed, “our national security interests don’t end at our borders. The mere fact that the lithium mine is in Argentina, and not in Canada is really irrelevant.” But Kucharski is calling for a Canadian, not Argentinian, government national security review.

In an article on Neo Lithium Kucharski wrote, “Resource firms should be considered as contributors to advancing Canada’s national security interests, irrespective of where their activities and assets are located.” With Canadian-based or listed mining firms operating thousands of international projects, Kucharski’s logic would grant Ottawa remarkable leverage over the global mineral supply and (probably) threaten Canadian companies’ vast profits. Right-wing, pro-corporate, voices don’t generally argue for measures that undermine Canadian mining firms (Why would a government allow a Canadian company into their country if it meant foreign sovereignty over their resources?). But, the ‘threat’ of China’s rise elicits all manner of double standards and absurdities.

Another China double standard is the discussion of Canada creating a foreign agents’ registry. Last week the Globe and Mail quoted a spokesperson for Canadian Friends of Hong Kong saying that “Canada needs a foreign agents registration act like those in Australia or the United States, as well as a centralized reporting centre for victims of intimidation by the Chinese government.” In the following sentence of the article Ian Bailey and Steven Chase quote “Mehmet Tohti, executive director of the Uyghur Rights Advocacy Project” (URAP). But URAP ought to be listed on any foreign agent registry worth its salt. URAP’s website says it “is funded by the Washington-based National Endowment Fund for Democracy for its Advocacy work in Canada.” The NED was established in 1983 to work alongside the CIA. In 1991 Allen Weinstein, a founding member and president, told the Washington Post, “a lot of what we [NED] do today was done covertly 25 years ago by the CIA.”

In a recent expose The Canada Files noted that Tohti has “far deeper connections to the NED than those stemming only from URAP. In 2004, Tohti was a co-founder of the NED-funded World Uyghur Congress. He was a ‘Special Representative’ of the WUC to the European Parliament between 2010 to 2012, and even served as Vice-President of the World Uyghur Congress for two separate terms.”

Tohti and URAP played an important role in pushing Parliament’s subcommittee on human rights to adopt a resolution calling China’s treatment of Uighurs a genocide. The House of Commons subsequently followed suit, which has pushed the Trudeau government towards more conflictual relations with Beijing.

The Globe and Mail’s senior parliamentary reporter, Steven Chase has quoted Tohti in a half dozen articles over the past two years. Chase has also written numerous articles about the need for a foreign agents’ registry. I did not find any article in which he mentions that Tohti’s group is funded by a CIA cut-out organization.

An important force pushing for a foreign agent registry is Kucharski’s MacDonald Laurier Institute. Its fellows have published recent op-eds titled “Canada needs a foreign agent registry to help it tackle China’s influence” and “The persistent threat of foreign interference in Canada’s democracy”. As part of their supposed concern with foreign governments interfering in Canadian politics, the MacDonald Laurier Institute established DisinfoWatch.org. In December it published “Influence Operation Targeting Canadian 2021 Federal Election”. The report noted, “The Chinese government has repeatedly demonstrated its readiness to advance its interest in Canada by directly manipulating Canadian political debate and policy through the use of disinformation, threats, intimidation, and influence operations directed at Canadian diaspora groups.”

Well, surprise, surprise, DisinfoWatch is also funded by the US government. The bottom of its initiating statement notes that “Development of the DisinfoWatch platform is funded by the United States Department of State’s Global Engagement Center and the US Embassy in Ottawa with support from Journalists for Human Rights.” And to move from hypocrisy into the realm of farce, the MacDonald Laurier Institute has received significant sums from the governments of Taiwan and Latvia.

Those calling for a foreign agents’ registry are not principally concerned with foreign influence in Canadian politics. They are obsessed with stopping the world’s most populous country from someday transplanting the US to become its most powerful.

Yves Engler’s latest book is ‪Canada in Africa: 300 years of Aid and Exploitation.