Anti-corruption protest in Haiti turns into referendum on Haitian president 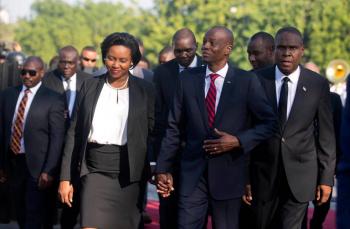 Haiti’s President Jovenel Moise arrives with his wife Martine and Prime Minister Jean Henry Ceant during a ceremony marking the 215th anniversary of Battle of Vertieres in Port-au-Prince, Haiti, Sunday, Nov. 18, 2018. The battle was the last major battle of Haitian independence from the French and fought in Cap-Haitien. Dieu Nalio Chery AP

As Haiti commemorated the 215th anniversary of its decisive battle against the French with nationwide protests Sunday, the country continued its downward tumble under President Jovenel Moïse as the embattled leader broke with tradition to commemorate the historic victory leading to Haitian independence.

Confronted with increasing calls for his resignation and his second major protest in a month, Moïse opted not to travel to the northern city of Cap-Haïtien where Haitian leaders have long celebrated the Nov. 18, 1803 Battle of Vertières. Instead he decided to pay homage to Haiti’s independence heroes in Port-au-Prince.

Joined by members of his administration, Moïse laid a wreath inside the museum of Haitian history, the Musée du Panthéon National Haïtien (MUPANAH), in the Champ de Mars public square across from the National Palace. The brief ceremony, which lasted less than 10 minutes, was followed by a 9 a.m. prerecorded address to the nation.

Recalling the Haitian Revolution battle where founding father Jean-Jacques Dessalines and others defeated Napoleon’s forces, Moïse called on Haitians to “wake up.” Underdevelopment and instability, he said during the seven-minute address, are twins, and Haitians should not allow “amateur acts” to veer them off the course of democracy.

Moïse’s words, however, did little to dissuade Haitians across the country from taking to the streets. Billed as an anti-corruption march to demand accountability from Haiti’s political class, accused of squandering billions of dollars in proceeds from Venezuela’s discounted PetroCaribe oil program, the demonstrations also turned into a referendum on the inexperienced president and his ability to lead Haiti out of its current political and economic morass.

At least five people were killed, including a security agent in Cap-Haïtien, Haiti National Police said. There were at least five individuals injured and 23 arrested as police sought to deal with protesters and armed gangs exchanging gunfire with police in some parts of the capital. Police also thwarted a prison break in the town of Anse-à-Veau in the Nippes region.

The protests were mostly peaceful until the end.

“A lot of rocks are being thrown in the direction of the police,” the Haiti National Police tweeted shortly before 3 p.m. as protesters arrived in front of the National Palace.

As protesters made their way to Champ de Mars, black smoke billowed in the air from burning tires and trash that barricaded some streets. In other parts, rocks were thrown including at Prime Minister Jean Henry Céant’s offices where police stood guard.

Just as they did last month on Oct 17, protesters gathered at various points across the capital with signs demanding to know Kot Kob Petwo Karibe a? — “Where is the PetroCaribe money.” But along with the slogan “stop them,” in reference to the accused, there were also chants of “Down with Moïse” as some demanded that his departure from office and replacement by a judge on the Supreme Court.

In between the chants, some protesters waved red and black flags — the original flag of an independent Haiti under Dessalines, the country’s first leader. The flag, which has been used over the years including during the nearly 30-year Duvalier family dynasty, was replaced with the current constitutional flag on Feb. 25, 1987 after the fall of the dictatorship.

On Sunday, a group of protesters flew the red and black flag from a statute of Dessalines on horseback that stands on the Champ de Mars. A video circulating on WhatsApp showed police climbing the steps with a ladder to remove the flag.

Janin Léonidas, a political observer and former senatorial candidate in the last elections, said Haiti lost something when Moïse refused to go to Cap-Haïtien to commemorate the historic battle.

“The president should have gone to Vertières, the biggest symbol the country has created,” he said.

By not going, Moïse showed that there is “a rift in the republic in the north, where the state practically doesn’t exist” and the presidency can’t travel there because of the social, political and geographic malaise facing Haiti today, Léonidas said.

Since assuming office 21 months ago, Moïse, a businessman who has never held public office, has struggled to govern Haiti. Regarded as stubborn and arrogant, he has frustrated supporters and diplomats alike with his refusal to take advice or reverse course.

Some have compared his current political woes to that of former President Jean-Bertrand Aristide. After facing his biggest opposition protest in Cap-Haitien on Nov. 18, 2003 as he commemorated the Battle of Vertières on the eve of Haiti’s bicentennial, Aristide had to cut short his Jan. 1, 2004 independence celebration in the city of Gonaives, two months, later due to protests amid his increasing unpopularity. A month later, on Feb. 29, Aristide fled into exile.

“This is all ‘déjà vu’ and it indicates that the political crisis is unending after more than 30 years of so-called ‘democratization,’ ” said Robert Fatton, a longtime Haiti political observer who teaches political science at the University of Virginia.

Fatton said he sees Moïse’s decision not to go to Cap-Haïtien Sunday as to prevent a repeat of July 6 and 7 when protesters, angry over a fuel hike, took to the streets in violent protests, overwhelming the country’s police force, which was unable to restrain the rioting.

“His decision not to go to Vertieres is an attempt to prevent a potential ‘dérapage‘ [unraveling] that might lead to a further polarization of the current situation,” Fatton said. “He is simply trying to defuse the crisis and hence his speech calling for unity and cooperation between all political forces. This betrays, however, the fact that the state is having a very hard time exercising its control over the territory.”

A report by a human rights group, Fondasyon je klere (FJKL), said as much after its investigation into a massacre in La Saline, a Port-au-Prince slum, where corpses were discovered last week. The report documented links between armed gangs, corrupt cops and government officials, and said that between 15 to 25 individuals were massacred based on interviews and the discovered bodies.

“The massacre of La Saline is the result of the state’s inability to guarantee security throughout its national territory,” the report said.

Fatton said that given the many challenge facing Moïse and the deteriorating sociopolitical reality landscape, it is unclear whether the president’s call for unity and dialogue will work given that the country’s “radical opposition views him as illegitimate” because of the way his presidential rise was constructed. He was elected with less than 600,000 votes after fraud allegations forced a rerun of the first round of vote, and forced the country into a transition. Even after Moïse was declared the winner after the rerun presidential vote, his closest competitor, Jude Célestin, and others refused to recognize his victory.

Complicating matters is that the president’s woes are all happening in the context of the PetroCaribe corruption scandal and the reality that Haitian government has virtually no material resources to use to pacify the country.

“The lack of both significant foreign assistance and indeed the absence of the type of PetroCaribe funding that previous administrations enjoyed have exacerbated the already poor living conditions confronting the vast majority of the population,” Fatton said. “Haiti is again facing a critical juncture with an uncertain outcome.”

Last week, both the Canadian and U.S. embassies led efforts to pacify the situation in meetings with the presidents of both chambers of parliament. The envoys also met with Prime Minister Jean Henry Céant, who on Sunday defended Moïse’s decision not to go to Cap-Haïtien, telling reporters that the Battle of Vertières, can be commemorated anywhere.