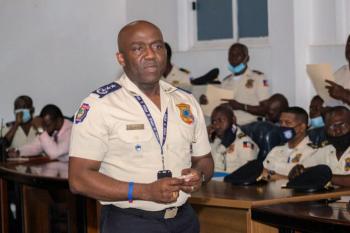 On Nov. 16, 2020, Léon Charles returned as Haiti’s Police Chief, a post he had previously held in 2004 and 2005. His tenure was marked by corruption and repression.

Sean and Jacquie are joined by Kim Ives, editor of the English section of Haiti Liberté, to discuss the new Haitian Police Chief’s apparent loyalties to Washington, the alarming recent announcement of a brand-new intelligence force with near-limitless police and surveillance powers in Haiti, how the UN has served as the “handmaiden” of U.S. colonial exploitation of the country, the why the move by the de facto government of Jovenel Moïse to rewrite the the Constitution strikes many observers as signaling a return to the days of the Duvalier dictatorship.