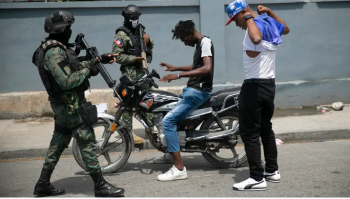 Armed forces check two men who were riding a motorcycle for weapons, at the area of ​​state offices of Port-au-Prince, Haiti, Monday, July 11, 2022. Radio TV Caraibe, a popular radio station in Haiti announced on Monday that it would stop broadcasting for one week to protest widespread violence in the capital.  (AP Photo/Odelyn Joseph)

Top officials in President Biden's administration are pushing for U.S. allies to deploy troops to Haiti to avert a potentially massive migration event.

U.S. Coast Guard encounters with Haitians attempting to migrate to the U.S. by boat have already risen more than 400% since last year, according to the New York Times. Haitians are fleeing the country due to mass gang violence, with criminal organizations taking over major population centers including some of the poorest areas in the country.

"That has always been the U.S. government’s biggest Haitian nightmare, a mass migration event," Daniel Foote, who served as the U.S. special envoy to Haiti in 2021, told the Times. "It’s already upon us; the next step becomes biblical, with people falling off anything that can float. We aren’t that far away from that."

While Haitian government forces have made successful counterattacks against gang groups, their troops reportedly remain fearful to walk freely in cities like Port-au-Prince, which they recently retook.

The Haitian government suffered a huge loss to what stability it had after President Jovenel Moise was assassinated last year.

The attack emboldened gang leaders to strike at government control of Port-au-Prince and Cite Soleil, one of the poorest cities on the globe.

Fear of an impending mass migration event has led several current and former Biden administration officials to push for a "multinational armed force" to deploy to the country, according to the Times. The officials are not seeking for the U.S. to deploy American troops, however.

The U.S. has already supported a resolution for the U.N. to deploy a "rapid reaction force" to Haiti, but it has made little progress. The U.N. last had a troop presence in Haiti in 2010 following the devastating earthquake that shook the country earlier that year.

Biden's administration is already facing a crisis at the U.S.-Mexico border, which includes some mass migration by groups of Haitians.

Biden's handling of the border has been among the most-criticized aspects of his presidency.

Biden's White House did not immediately respond to a request for comment from Fox News Digital.