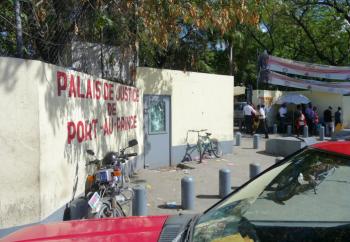 Armed bandits took over the Court of First Instance (Palais de Justice) building on Jun. 10 in a brazen confrontation that left one person shot and scores of government prosecutors, judges, and lawyers too afraid to report to work.

Workers said members of the “Five Seconds” gang shot a security guard as they bum rushed the property, broke open its windows, vandalized the judges’ courtrooms, and seized court files. The gang, based in nearby Village-de-Dieu, is led by a young man known only as “Izo” or on his police wanted poster, “Izolan.” The gang also made off with several commissioners’ vehicles.

“I just escaped death,” attorney Arnel Rémy said to The Haitian Times. “If it weren’t for God, I would’ve been dead on the spot. As a lawyer, I have a responsibility to demand that no one, lawyers, judges, clerks should not come to the Courthouse for the moment.”

Rémy was speaking moments after fleeing in a vehicle with five others from the courthouse, as shots were fired at the car. Rémy’s driver lost control of the car, but no one was injured.

In the days that followed, similarly gripping stories flooded social networks and local radio as judges, lawyers, litigants, and prisoners relayed how they narrowly escaped injury or death. Some scaled the walls of the courthouse or climbed on prisoner’s backs, desperate to flee.

Police officers – whose agency was celebrating its 27th anniversary over the weekend – were assigned to guard the courthouse. But they proved powerless as the bandits overpowered them with higher caliber guns.

It was the fourth attack on the courthouse, which unidentified armed individuals burglarized on May 10, Jun. 5, and Jun. 7. To many victims and observers, the assault is yet another indication of the Haitian government’s careless attitude about securing the courthouses and ensuring that Haiti has a functioning judicial system.

Members of the courts were already reeling from the lack of progress made in prosecuting several high-profile murders, including that of assassinated President Jovenel Moise and constitutional law expert Monferrier Dorval.

In the past, members of the judicial system have pleaded with Haiti’s government to relocate the Court of First Instance, as the facility is called, from the dangerous Bicentenaire area, along the capital’s waterfront. They complained that the building is in a state of chronic dysfunction, due to increased violence and kidnappings in the area.

In April, lawyers from Haiti’s Bar Association held a sit-in to demand that the government relocate the civil court to a safer area. Days earlier, the Dean’s Office was relocated to expedite urgent cases, instead of the entire courthouse, as lawyers had requested.

Jacques Lafontant, the government’s top prosecutor (commissaire du gouvernement), has said after each courthouse attack that an investigation was underway, but no official findings have been made public.

Each time, Lafontant assured that no sensitive documents were stolen. However, judges and lawyers said they have lost client files as they fled the violence. Some attorneys also said on local radio that police tried to remove a large safe used to keep important files, weapons seized, and other potential evidence. It’s unclear what happened to the safe, they said.

The Moïse case files are among those kept at the facility.

Rémy said on local Radio Caraibes on Jun. 13 that this attack “brought Haiti’s justice system to its knees.”

During the Friday attack, the gang stole four vehicles belonging to different commissioners, said Lafontant on local radio. Eyewitnesses said the bandits pushed the vehicles toward their base in Village de Dieu, located a short distance away in Bicentenaire.

An earlier version of this article was published on the website of The Haitian Times.