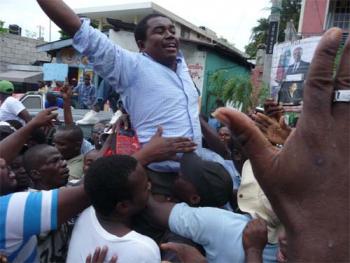 Over 1000 people massed in front of a police station in the Martissant section of Port-au-Prince on the evening of Oct. 22 as police encircled the car of outspoken lawyer André Michel. He was stopped by police shortly after 6 p.m while driving nearby.

Just before 10 p.m., the police removed Michel from his vehicle, smashing its windows, his lawyer Newton St. Juste said. Mr. Michel was then taken into the police station, as CIMO riot police fired teargas and shots in the air to disperse the angry crowds outside.

At midnight, Mr. Michel was still being held in the station with clusters of protestors re-gathering on some street corners, despite the lingering teargas.

Last year, Mr. Michel brought a suit against President Michel Martelly and his family for corruption. Shortly thereafter, the government issued a warrant for Mr. Michel’s arrest, accusing him of involvement in the 2010 killing of a student, Frantzy Duverseau.

The victim’s father, Ovil Duverseau, who was a witness to the incident, has publicly said that Mr. Michel was not responsible in any way for his son’s death. Instead, Mr. Duverseau blames Martelly’s police force for his son’s fatal beating following an altercation.

In radio interviews by cellphone on different stations in the capital from his besieged car, Mr. Michel said that Justice Minister Jean Renel Sanon and Martelly’s hard-liner confidants, the brothers Gregory and Thierry Mayard-Paul, were behind his arrest, which was carried out by government commissioner Francisco René. On Radio Kiskeya, Mr. Michel said of Mr. René that “I don’t consider him a government commissioner or a judge, I consider him as a bald-headed (tèt kale) militant,” the term used to describe Martelly partisans.

“Unfortunately, we live in a country where a group of people think that they have all the rights, while other people have no rights because they are in the opposition,” Mr. Michel said.

In addition to Mr. St. Juste, several other lawyers arrived at the scene in solidarity, charging the arrest was completely illegal. Under the Haitian Constitution, the police cannot make an arrest between 6 p.m. and 6 a.m., unless they catch someone in the act of committing a crime.

Despite the warrant hanging over his head, Mr. Michel has been circulating and speaking out for months, aware that “the police have been following me.”

“For a long time, I have resumed my professional and political activities, and I have been fighting the good fight,” Mr. Michel said. “I said to myself I would not hide, because when you hide, you facilitate the task of the person who is trying to make you hide.”

“It is important to defend our democratic gains in Haiti” since the fall of the Duvalier dictatorship in 1986, Mr. Michel concluded in one of his radio interviews. “We have to have the courage and determination for that.”

As we go to press, several burning tire barricades and small demonstrations are flaring throughout the capital, radios report.