Biden must stop propping up the old guard in Haiti 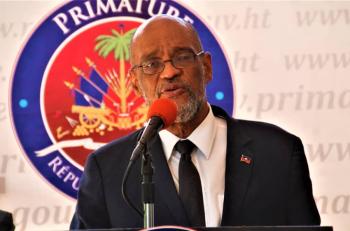 The Biden administration is missing the boat on a generational opportunity to help Haitians get their troubled democracy back on track. By choosing loyalty to its friends in the PHTK (Partie Haitienne Tet Kale) political machine that has dismantled Haiti’s democracy for a decade over a promising broad-based civil society initiative, the administration is condemning Haitians to even more misery and repression and the United States to more foreign policy failure.

Haitians are not asking Washington to do much. In fact, they are mostly asking us to not do things, especially propping up the current PHTK regime, which has run Haiti for most of the past decade.

As State Department Special Envoy to Haiti Daniel Foote wrote in his September 22 resignation letter, Haitians want “the opportunity to chart their own course, without international puppeteering and favored candidates.” Ambassador Foote resigned because his efforts to rein in the puppeteering were “ignored and dismissed.” The last straw was “another public statement of support for the unelected, de facto Prime Minister Dr. Ariel Henry” while the State Department continued to “tout” Henry’s unpopular political agreement “over another broader, earlier accord shepherded by civil society.”

The broader, earlier accord is the work of the Commission for the Search for a Haitian Solution to the Crisis, which has met since January to develop a process for installing a credible interim government that can run fair elections and install a government with the legitimacy to address Haiti’s multiple crises. The Accord has over 650 signatories, including most of the major political parties, the Catholic and Protestant churches, labor unions, chambers of commerce, women’s organizations, anti-corruption organizations, and rural and urban grassroots groups. Commission participants come from across Haiti’s political and social spectrum and many have been on opposing sides of fierce disputes for decades. But the magnitude of Haiti’s crises and the PHTK’s resistance to fair, inclusive elections induced the groups to come together and forge a consensus process that can restore stability and democratic order to Haiti

The Accord starts with the premise that the PHTK, which has never run an election that was either fair or timely, must be replaced by a credible interim government. The Accord would establish a National Transition Council, with a little less than half the seats going to major political parties and a little more than half going to a broad spectrum of civil society organizations. The NTC will choose a Transitional Government, entrusted with restoring regular governance and running elections within two years. Once the transitional government is in place, the NTC will join a larger Transition Control Organ, which will provide oversight to the government.

The foundation of this process is pairing politicians — who know how to wield political power, but are often perceived as conflictual and corrupt — with civil society organizations that will keep the politicians honest and enforce Haitian traditions of consensus building. The Accord’s process is untested, slow, cumbersome, and outside of Haiti’s constitutional framework. But Haitians have been willing to trade speed for a process that persistently allows broad input and achieves compromises on thorny issues. They prefer patiently addressing the complexity of their country’s crisis over hasty expedients that will only increase their misery in the medium and long terms.

The principal alternative to the Accord, continued PHTK rule, is also outside of Haiti’s constitutional framework. Ambassador Foote called Prime Minister Henry “unelected de facto” because, among other things, he was never ratified by Parliament as the Constitution requires. After a decade of PHTK rule, only 10 elected officials of the thousands established by the Constitution are in office.

Unlike the Accord, continued PHTK rule has no chance of leading to a sustainable resolution of Haiti’s crises. The PHTK party has not only never run fair elections, it has also dismantled the democratic structures that accompany good elections and good governance. There is no electoral council, the judiciary has been cowed by illegal arrests and firings of judges, and government anti-corruption agencies were neutralized.

The PHTK replaced the democratic structures with a political machine fed by spectacular corruption. The consequent diversion of resources has left the government unable to deliver the basic services needed in any successful society, including security and public health. Haiti’s gangs are currently on U.S. radar screens because they are holding 16 U.S. missionaries and preventing transport of gasoline and international aid supplies.

But the gangs have been holding Haiti’s people and democracy hostage throughout the PHTK reign, often in collaboration with the PHTK. Earlier this year, a report from Haitian human rights groups and Harvard Law School concluded that repeated attacks on PHTK opponents by gangs working with police and government officials were widespread and political enough to constitute crimes against humanity.

The PHTK government could not even put the Biden administration’s generous donation of COVID-19 vaccines to good use. The United States sent 500,000 Moderna vaccines to Haiti’s government through the COVAX program in July. But as of the end of October, only 135,256 doses had been administered, among a population of 12 million, leaving Haiti the least vaccinated country in the Americas. This month, COVAX is taking “hundreds of thousands” of these doses back, to use elsewhere before they expire.

Getting vaccines into the arms of the remaining 99.7 percent of Haitians who are not fully vaccinated is vitally important, but will not happen until the country has a government committed to building the public health system, not looting it, and has earned the trust needed to overcome vaccine hesitancy. Allowing a credible replacement to PHTK to emerge will also provide the United States and others wanting to help Haiti with a broadly-supported interlocutor that can facilitate sustainable international cooperation regarding gangs, energy, economic development and the other contributors to Haiti’s crisis.

Brian A. Nichols, the State Department’s Assistant Secretary of State for Western Hemisphere Affairs, responded to criticism of U.S. policy by committing “to supporting a Haitian-led solution to the country’s challenges.” Nichols also said the United States “won’t pick winners and losers.”

But Haitians know that Washington has already been picking the winners in Haiti. Ambassador Foote admitted as much in his letter, and Prime Minister Henry attained his office because the “Core Group” — led by the United States and including no Haitians — picked him by announcing that Henry was replacing his equally illegitimate and U.S.-installed predecessor Claude Joseph. In fact, Ambassador Foote told the House Foreign Relations Committee in October that the PHTK government would not be able to maintain power if Washington stopped propping it up.

Skeptics believe that Assistant Secretary Nichol’s commitment to a Haitian-led solution is limited to the political agreement that PM Henry hastily launched after the Accord generated so much support. Very few groups not connected to PHTK support the agreement, but the US keeps touting it. Seeing this, the skeptics believe that Nichols’ promise not to pick winners and losers means protecting the PHTK against any new “winners,” leaving PHTK in power and the Haitian people and their democracy as the losers.

The State Department can prove the skeptics wrong by ceasing to prop the PHTK government up. Doing nothing in the face of such a crisis, and allowing a lengthy process to play out will take some forbearance. But it is exactly what Haitians, who understand their context much better than people in the United States, are asking us to do. We owe them that chance.