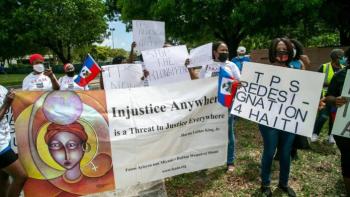 A recent demonstration organized by FANM and community leaders gathered outside the Broward Transitional Center in Pompano Beach calling on the Biden administration to restore TPS to undocumented Haitians in the U.S. Photo: Jose A. Iglesias/Miami Herald

fter deporting a record number of Haitians within his first 100 days, U.S. President Joseph Biden on May 22 redesignated Haiti for Temporary Protected Status (TPS). Some 154,000 Haitians living in the U.S. as of May 21 may benefit from the new classification. President Donald Trump had rescinded TPS from Haitians and most other protected nationalities in the first two years of his presidency.

TPS was first granted to Haitians by President Barack Obama in 2010 after tens of thousands died or lost their homes in the Jan. 12 earthquake that year. The renewed TPS only grants reprieve to Haitians already living in the U.S.. But many hundreds or even thousands of U.S.-bound Haitians remain stranded in Central America or at the Mexican border after trekking thousands of miles from Brazil, Chile, or Ecuador, where they ended up as refugees from the 2010 earthquake. Many of the recent deportees were migrants who came across the U.S./Mexico border.

WHILE THE RENEWAL OF HAITIANS’ TPS IS A WELCOME MOVE, IT WAS PRECEDED BY A SCANDALOUS EXPULSION SPREE

“It’s a break for people who have been looking over their shoulders, who have been worried and concerned about what happens if they’re not given this relief and either become undocumented or detained and deported back to Haiti,” Nana Gyamfi, executive director of the Black Alliance for Just Immigration, told Democracy Now on Mar. 24. “It’s a break, but that’s all it is… and we obviously want more.”

While the renewal of Haitians’ TPS is a welcome move, it was preceded by a scandalous expulsion spree. Biden’s Department of Homeland Security (DHS) deported to Haiti since Feb. 1 about 1,800-2,200 Haitians, including hundreds of children, on at least 34 flights, more Haitians than Trump expelled during all of 2020.

Immigrant advocates have called for improvements to TPS since its inception. The program must be renewed every 18 months, and many undocumented Haitians were hesitant to enroll out of fear of being vulnerable if it is terminated, as happened under Trump.

Fortunately, organizations like Haïti Liberté and Family Action Network Movement (FANM) became plaintiffs in a lawsuit (Saget vs. Trump) in New York organized largely by the Institute for Justice and Democracy in Haiti (IJDH), while Haitian Women for Haitian Refugees joined one organized in Washington, DC by the National Association for the Advancement of Colored People (NAACP vs. DHS, Elaine Duke & Kirstjen Nielsen). The New York suit won a preliminary injunction (like a multinational TPS lawsuit in California), thereby delaying Trump’s TPS repeal, which the COVID-19 pandemic also helped postpone. Meanwhile, the American Dream and Promise Act, introduced by Rep. Nydia Velasquez (D-NY), promises a path to permanent residency for TPS holders and Dreamers (potential beneficiaries of the Development, Relief, and Education for Alien Minors – DREAM – Act, which has passed the House of Representatives and would grant temporary conditional residency, with the right to work, to unauthorized immigrants who entered the U.S. as minors).

However, like TPS, the American Dream and Promise Act does not cover undocumented immigrants charged with crimes, for which the majority of Haitian deportees are removed, according to DHS. One does not have to be convicted to be removed on criminal grounds; many are removed after a simple arrest, and most are deported for non-violent offenses. Due to predatory policing in Black communities, 80% of Caribbean migrants are deported on “criminal” grounds. Protections should be expanded to those whose “criminal” records result from frivolous or racist arrests, especially for non-violent offenses.

Restoration of TPS has given hope to many Haitians currently exploited by employers and landlords due to their lack of legal status. This will allow many who have been undocumented in the U.S. for decades to enroll in school and find good-paying, safer jobs.

Redesignating Haiti for TPS is good for the U.S. too. It prevents disruptions to the U.S. economy and communities and maintains the crucial flow of remittances on which Haiti’s economy and families depend. It will also prevent the separation of U.S.-born children from their parents.

It is somewhat surprising that on May 18, Haitian Flag Day, during a virtual press briefing only four days before the TPS announcement was made, the U.S. State Department (whose analysis of country conditions informs TPS decisions) deflected specific questions on redesignating Haiti for TPS and restarting the Haitian Family Reunification Parole Program (HFRP).

Activists are now training their sights on HFRP, under which 8,300 Haitian beneficiaries of DHS-approved immigrant visa petitions were “paroled’ into the United States to join their petitioning family members somewhat sooner than under the normal necessary waiting process. Trump crippled the program, begun in March 2015 by President Obama, by stopping the issuance, during his four years in office, of any new invitations to apply for the program.

“Candidate Biden promised, in writing, last Oct. 5 while visiting Miami’s Little Haiti while campaigning in Miami that he would restart HFRP,” explained Steve Forester, the IJDH’s Immigration Policy Coordinator. “So far, he hasn’t done it. It should be low-hanging fruit. The program still exists on the books. Biden just needs to start issuing the invitations once again. He should keep his promise to restart the program, and he should also improve it.”

The World Food Program estimates that 4.4 million Haitians – almost half the population – are at risk of hunger. Haitians’ already-limited access to health services and hospitals has been reduced further by political violence and insecurity; children are missing routine immunizations. The Pan American Health Organization (PAHO) recently criticized Haiti’s government for failing to complete basic requirements to get COVID vaccinations which PAHO provides for free. Haiti’s Parliament has been dysfunctional since January 2020, when the mandates of nearly all members expired without elections; the terms of all elected mayors ended last July, leaving Haiti’s de facto President Jovenel Moïse ruling by decree with no legislative oversight and virtually no checks on his repressive powers.

Haiti is now plagued by insecurity and fear after a breakdown in the rule of law.  Impunity, corruption, and violence reign. Worsening economic conditions and ever-greater food insecurity prevail. Despite nationwide outcry and legal consensus that his term ended on Feb. 7, 2021, Moïse is forging ahead with illegally rewriting Haiti’s Constitution and national elections.

TPS redesignation is an important victory, but the fight isn’t over. TPS by definition is a “temporary” status, even if it can be extended for successive 18 month periods.  What TPS populations require is the security of permanent status in the United States.

People may download forms and look up filing fees at https://www.uscis.gov/i-821.