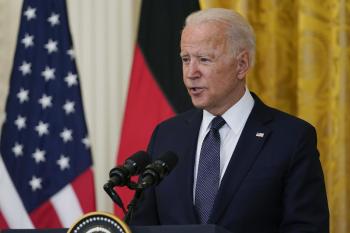 Before it became notorious as a place to imprison, and even torture, Muslim men suspected of terrorism, Guantánamo Bay had long been a critical location for holding migrants intercepted at sea by the US Coast Guard.

And now, President Biden’s administration, for the second time since he took office, is floating the idea of holding Haitian migrants who seek asylum in the United States in a migrant processing center the federal government operates at the Guantánamo naval base, which is separate from the terrorist detention facility. According to NBC News, which broke the story last week, the Biden administration is considering the Gitmo migrant center as it expects a mass exodus of Haitians fleeing the rapidly deteriorating situation in Haiti.

The idea of offshoring Black asylum seekers would be yet another atrocious violation of international refugee law and a historically shameful policy. Instead, the Biden administration should be focusing on sensible solutions to migrants seeking refuge in our country, such as granting an expansion of Temporary Protected Status for Haitians or meaningfully expanding asylum processing at ports of entry at the US-Mexico border.

Haiti has seen many humanitarian crises in the past decade or so, but in the past few months, intensifying armed violence has sent the small Caribbean nation to a new low. Close to 100,000 Haitians have been displaced in recent months due to gang-related violence, according to the International Organization for Migration. “People are being killed by firearms; they are dying because they do not have access to safe drinking water, food, health care; women are being gang raped with impunity,” United Nations human rights chief Volker Türk said this week. Türk said Haiti is “on the verge of an abyss.” For his part, the UN High Commissioner for Refugees Filippo Grandi urged other nations “not to return Haitians to a country that is extremely fragile.”

The Biden administration did dramatically slow down expulsion flights of Haitian asylum seekers in recent months. From September 2021 to June 2022, the federal government sent back more than 26,000 Haitians and faced sharp criticism for doing so, given that the practice of forcibly removing people to a country where they may face irreparable harm or serious violence is a violation of international refugee and human rights law. As Grandi noted in his recent press release, Haitians who seek to apply for international protections should have access to fair and efficient asylum procedures.

That’s one reason why sending Haitians to Gitmo would be practically unlawful. Would Haitians detained in Guantánamo have access to immigration lawyers? Would they have an opportunity to make their asylum claims at all?

Here’s where the historical record comes in handy. In the 1980s, the federal government began holding asylum seekers from Haiti in the Guantánamo migrant facility. But most of them didn’t have a chance to file formal claims of asylum, as Jeffrey S. Kahn, author of “Islands of Sovereignty: Haitian Migration and the Borders of Empire,” noted in a comprehensive 2021 Boston Review essay describing Guantánamo’s history of detaining Haitians.

“Intercepted Haitians were to be interviewed and were to be brought to US soil to pursue their asylum claims if there was an indication they might have a fear of persecution,” Kahn wrote. “The intent — again, on paper — was to meet US commitments to international refugee law, but the numbers tell a different story. During the first decade of interdiction (1981–1989), 21,461 Haitians were intercepted at sea, but only 6 were brought to US soil to lodge formal requests for asylum — less than one tenth of 1 percent, during a period of dramatic tumult in Haiti that included the violent death spasms of the Duvalier dynasty, multiple coups, and an election day massacre.”

Then, in the early 1990s, roughly 300 HIV-positive Haitians, including women and children, were held in Gitmo. In 1993, legal action ultimately shut down the facility, deemed the “world’s first and only detention camp for refugees with HIV,” as one of the co-counsels for the case wrote in an article for the Harvard Human Rights Journal.

Singling out Haitians for detention at Gitmo exposes the Biden administration’s disparate treatments of people fleeing war or intensifying civil unrest (Ukrainians are exhibit A.) The US government has other tools at its disposal to deal with the Haitian humanitarian crisis. Last month, US Senator Ed Markey of Massachusetts led 15 of his colleagues in urging the Biden administration to extend and redesignate Temporary Protected Status for Haiti. “A redesignation of TPS will allow newly arrived Haitians in the United States to lawfully support themselves and the communities that have welcomed them,” said Markey.

He is right. Haitians are desperate. It is shameful that the Biden administration is reacting by considering a racist plan that involves Guantánamo.