As Black immigrants, this movement for equality is ours, too 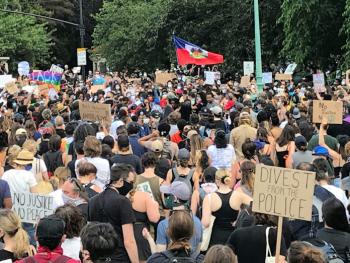 The Haitian flag flies over a demonstration led by Haitian drummers in Brooklyn on Jun. 7, 2020. Photo: Kim Ives/Haïti Liberté

I was scrolling through photos on social media of my cousins and teenage nieces at a Black Lives Matter protest when it struck me. As I looked at them in face masks, puffy black hair standing tall, I realized how far we Haitian Americans have come in proclaiming our American Blackness.

Yes, we’re Black people. We hail from the first Black-led republic in the modern world. But, for us and many other Black immigrants, “Black” in America has often meant African American. And with our unique history and experiences across the diaspora, most of us, even with American citizenship, recognize that the term “African American” is not ours to claim.

Now, the killing of George Floyd and a massive global uprising against systemic racism seems to have pushed Haitian Americans, across generations, to join an equality movement that began began long before we came to the U.S. This fight against racism is drawing us together regardless of whether our ancestors got here 400 hundred years ago in chains or 40 years ago on planes.

Many Haitian families, civic leaders, and individuals had been demanding police reform and accountability for years, having had our own traumatic experiences with police. With the #BlackLivesMatter groundswell, raising our voices in this shared struggle makes us inextricably part of the Black American experience, too.

Countless intricacies have led many of my fellow Haitians to stand firmly in this moment – doing so with the Haitian flag boldly displayed or with Haitian drums leading the way. For me, as a 1.5 generation Haitian American, this evolution has been long in the making.

Growing up in Haiti, I had learned by age 5 that Haitians kicked out the French in a brazen revolt that brought about our independence in 1804. Everyone loved the epic tales of the 12-year revolution’s legends: Dutty Boukman, Toussaint Louverture, Jean Jacques Dessalines, Catherine Flon, Henri Christophe, and Alexandre Pétion. The best of our raconteurs made me feel like I could hear the conch shell beckoning the enslaved to rise up and fight for liberty or die.

Even when Haiti’s descent into turmoil made us seek security and stability elsewhere, the love for country made me patient and hopeful for a better country to return to.

When we immigrated to Brooklyn in 1989, my mother told us kids to take the “good” parts of America, such as education, but leave the “bad,” such as friendships with kids who might lead us astray. She also said not to get mixed up in Americans’ affairs because we were just passing through as Haitians.

In 1990s Brooklyn, this was not difficult to remember. From Flatbush to Brownsville, East New York to Crown Heights, I ate Haitian food, went to Haitian church, attended Haitian functions, and hung out with Haitian cousins.

When Black kids picked fights or called us names, we closed ranks and hurled our own stereotypes. But as time passed, and I met more Black Americans, I began to have a different perspective.

In junior high, I was lucky to have Black teachers who taught us about their legends: Harriet Tubman, Sojourner Truth, Frederick Douglass, W. E. B. Dubois, and Martin Luther King Jr. They spoke with as much reverence, if not the theatrics, as Haitians spoke of their heroes.

Learning how Black Americans had survived chattel slavery and Jim Crow to become inventors, moguls, community activists, astronauts, and more left me in awe and inspired a new level of respect.

When I was 13, I spent the summer reading Alex Haley’s Roots, Queen, and Malcolm X. My blood boiled reading these pages filled with family narratives so similar to Haitian stories and with so many historical parallels. I decided then that Haitians and Black Americans were more alike than not. We just got dropped off at different ports during the Transatlantic Slave Trade.

Plus, what Black Americans had accomplished through the civil rights movement paved the way for Black immigrants to be in America. I was benefitting from their struggle.

After the 2000 census survey, Black immigrant groups mounted a push for the U.S. Census Bureau to recognize distinctions among Black people in the U.S. and to stop lumping all non-Hispanic Black people under African American. Haitians were among the most vocal because, as we argued then, we were undercounted and, consequently, deprived of crucial funding to meet needs unique to our community — needs we faced on top of the broader challenges of being Black.

For years, the sexual assault of Abner Louima in an NYPD precinct bathroom topped the list of egregious conduct. Then came the NYPD killings of Guinean immigrant Amadou Diallo and Haitian Americans Patrick Dorismond and Georgy Louisjene. My cousin was arrested for resisting arrest in an East Flatbush “sweep” that terrified us.

It was clear to me by then that if you were Black — whether an immigrant or African American — you were a target of the police and could be summarily arrested, injured, or killed. My youngest brother was 10 or 11 when I gave him the flyers about what to do when, not if, police stopped him.

During such family discussions about police brutality, and its cousin racial profiling, my father would shake his head and say, in his puzzled way: “It’s like they don’t want to see anyone Black at all.”

I began to realize that while those of us who came here as immigrants may choose to identify as both Haitian and American, the experiences of our children — who are born here and grow up as part of the culture — are unmistakably African American.

When my niece was nine, during a history lesson about slavery, her teacher explained that “Black people were slaves” and White peoples were their masters. In the middle of this nearly all-White class, a White girl, one that my niece thought was her friend, blurted out, “Oh, you’re my slave.”

All the White girl saw was the color of my niece’s skin — the same thing racist police see when they look at any Black person. It is all racists see at school, at work, at the gym, in the parks or coffee shops, on the streets, and anywhere else Black people are attacked for being Black.

A lot of Black immigrants like me, I suspect, have come to see that for our children and their children to live the better lives we envisioned in this country, we need to be all-in against racism — no matter where or whom it strikes.

It’s why seeing my cousins and my nieces at that protest felt as if Haitian Americans had reached another milestone in America. Seeing so many people holding up both Black Lives Matter and Haitian Revolution placards embodies the Haitian saying: men anpil, chay pa lou. “With many hands, the load is light.”

And Black Lives Matter, this anti-racism movement, is our load to lighten as Black people in America.

Macollvie J. Neel is a writer and communications consultant based in Brooklyn, NY. She emigrated from Haiti to the U.S. when she was 10. This article was first published by Yes! Magazine.