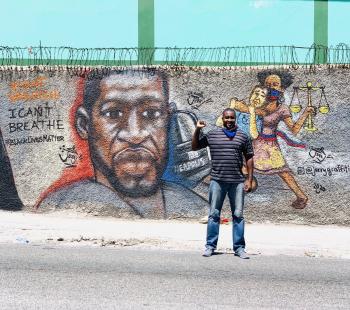 Jerry Moïse raising his fist next to his mural of George Floyd in June. Nadia Todres’s Twitter Images

CHIP Editor's note: Follow the link to see the artwork referenced in the article.

George Floyd forced himself to utter “Mama” as then-police officer Derek Chauvin pressed his knee into Floyd’s neck. At that moment in the video, the tears began to flow from the eyes of Woodly “Filipo” Caymitte, who was watching the infamous recording from his sculpture studio in Port-au-Prince.

Caymitte, who studied sculpture in France, Cuba and Belgium, said he experienced racism himself. So he could’ve been the one pinned down on the concrete, gasping for air, Caymitte said.

To immortalize Floyd and the watershed moment he inspired, Caymitte created Floyd’s face in a sculpture soon after his murder on May 25, 2020, to spread the message that racial injustice must end.

“It was very emotional for me to do it,” Caymitte said. “I wanted to contribute to this movement with my art. It’s a memorial for him [Floyd] so they don’t forget him. It’s tied up with all the acts of racism Black Americans or any Black people suffered.”

Over the years, numerous other Haitian and Haitian-American artists have reflected on racial injustice through their chosen medium. Following is a list of 10 such artworks by Haitian compatriots who have memorialized the racial movement. The list is organized in reverse chronological order.

Kenny Altidor unveiled a mural of Floyd on the corner of East 80th Street and Flatlands Avenue in Canarsie, Brooklyn on Jul. 13. Floyd’s brother, Terrence Floyd, was at the unveiling.

Altidor, 42, said he put the Haitian flag in the mural to showcase that Haitians started the Black Lives Matter movement by being the first Black nation to abolish slavery.

Altidor has been doing murals for 15 years mostly of fallen police officers, firefighters and other first responders. Serge Toussaint, a renowned muralist, taught Altidor the craft in Haiti when he was 10.

Steven “Atlioux” Brandt co-painted the mural of Rayshard Brooks with David Flores on Pioneer Place, a mall in downtown Portland on Jun. 15.

Brandt is a Port-au-Prince born street artist who often collaborates with Flores.

Brooks was a drunk driver a police officer shot dead while he was running away with a taser in a parking lot in Atlanta on Jun. 12.

Jerry Moïse, better known as Jerry Graffiti, sprayed the graffiti of Floyd next to Mother Haiti choking Chauvin on a wall next to Bourdon Road in Port-au-Prince in June.

Haiti, as the first independent Black nation, is defending Floyd in the graffiti, Moïse said.

On the other side of the mural, Moïse, 34, focused on the violence that takes place in Haiti by drawing a made-up Haitian neighborhood and writing: “Black lives are important. Haiti future matter. The ghetto can’t breathe” in Creole.

Brandt co-painted a mural of Floyd with Flores on an Apple Store in downtown Portland on Jun. 4.

The pair was inspired to do the mural because police officers have confronted them before while they were making street art.

Floyd’s mural is across the street from their mural of Brooks.

Haenley Pierre created the digital painting of a man with a Haitian flag over the bottom part of his face and a shirt that reads “I can’t breathe” in June. “W ap Konn Jòj” (You’ll see what’s coming for you) is written on the raised fist symbol of Black Power behind the man.

Pierre is a Haitian-born painter and digital artist based in New Jersey.

Caymitte sculpted Floyd’s face in May 2020 and reserved it for his family or community.

He started sculpting in 2010 as a way to deal with what he experienced in the 2010 earthquake. Caymitte teaches sculpture to blind people and at the National School of Arts in Port-au-Prince.

Hérold Pierre-Louis, an artist of Grand Rue, Port-au-Prince, painted a man in a suit buying portraits of George Floyd on May 30, 2020. Pierre-Louis, 24, wrote on social media that the man is buying the portraits to put in his house so when racist people visit him they can see them.

Marcus Brutus, a Haitian-American based in Maryland, painted “The Uhmericans” in 2018. It was his debut solo exhibition.

In the painting, two Black men are wearing the jerseys of two of the first athletes who refused to stand during the national anthem to protest against racial injustice. Colin Kaepernick’s jersey is on the right and Mahmoud Abdul-Rauf’s jersey on the left.

“The Ouroboros” is a 2017 acrylic on canvas painting by Claes Gabriel, a Haitian-born artist based in Philadelphia.

Ouroboros is the circular symbol of a snake. The painting portrays a smiling Black man hand in hand with a moody police officer with a drop of blood between them.

“The Ouroboros” is part of the “Between Us” collection, one of Gabriel’s most controversial works, experts said.

Jean-Michel Basquiat, the famed Haitian and Puerto Rican graffiti artist of the 1980s, broke the record for the most expensive painting ever sold in 1982 with “Untitled.” However “Defacement” was perhaps his most intimate work, Chaédria LaBouvier, an art historian, told The Guardian.

Basquiat painted “Defacement” on a wall in Manhattan days after Michael Stewart died from injuries sustained in an attack by transit police officers in 1983. Stewart was caught spraying graffiti on the wall of a First Avenue train station in Manhattan.

“It could have been me,” Basquiat said about Stewart’s death.

The mural has since been cut out and is now owned by Nina Clemente.