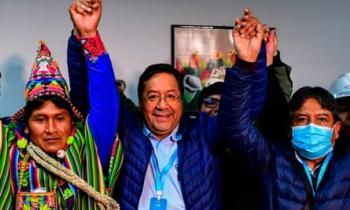 In a victory for Indigenous people, Bolivians voted overwhelmingly for the MÁS party last week.

Sunday’s result is a clear rejection of Canadian foreign policy in Bolivia and the region, and this moment should spur a reevaluation of Ottawa’s pro-U.S. stance in the hemisphere, notably its brazen contribution to the efforts underway to overthrow Venezuela’s government.

Canada lent its support to the economic elites and Christian extremists who overthrew Bolivia’s first Indigenous president, Evo Morales, in November. Far from bystanders, the Trudeau government offered diplomatic, financial and technical support to the Organization of American States’ (OAS) effort to discredit last year’s election results, which stoked opposition protests and legitimated Morales’ ouster. A celebratory statement issued by Chrystia Freeland, then foreign affairs minister, hours after anti-Indigenous protesters and the military forced Morales out, noted, “Canada commends the invaluable work of the OAS audit mission in ensuring a fair and transparent process, which we supported financially and through our expertise.”

Immediately after his victory on Sunday, president-elect Luis Arce stated the “OAS has to make amends for their mistakes” last year. Simultaneously, the Puebla Group, which includes the former Brazilian, Paraguayan and Ecuadorean president as well as the former prime minister of Spain, called on OAS head Luis Almagro to resign for the organization’s role in the 2019 coup d’état. The post- election letter from the Puebla Group argued that “several studies by international research centers have pointed out in recent months: there was no fraud in the October 2019 elections, and Evo Morales should have been in office as the legitimate president of Bolivia.”

One of Arce’s first announcements since taking office is his plan to restore relations with Cuba and Venezuela. Without any electoral mandate, Bolivia’s previous “caretaker” government expelled Cuban doctors and diplomats and joined the Canadian-led Lima Group of countries seeking to oust Venezuelan president Nicolás Maduro.

Canada is at the helm of the Lima Group of countries, a body that claims Juan Guaidó, an opposition National Assembly member, is Venezuela’s rightful president. For the past two years, Ottawa has played a key role in building support within Venezuela’s opposition and internationally for Guaidó’s audacious plan to declare himself president. From Japan to Slovakia, Canada’s prime minister and foreign minister have lobbied countries to join their bid to unseat the South American nation’s government. Last week, for instance, Foreign Minister François-Philippe Champagne raised the issue of Venezuela during a meeting with his Lithuanian, Latvian and Estonian counterparts.

Canadian officials claim to be promoting democracy and human rights in Venezuela, an assertion at odds with their decision to partner with Bolivia’s unelected, anti-Indigenous government in their campaign. Another Lima Group ally is Honduran President Juan Orlando Hernández, who has far weaker constitutional legitimacy than Maduro. Other members of the Lima Group include Haitian President Jovenel Moïse, who has faced unprecedented protests over corruption and repression, as well as Colombian President Ivan Duque, who oversees significant human rights violations. Representing the hard right, Duque’s bid to scuttle his predecessor’s historic peace agreement with the FARC guerillas has contributed to a huge spike in assassinations of Indigenous and social movement leaders in Colombia.

Questioning our policy towards Venezuela is part of an open letter calling for a “fundamental reassessment of Canadian foreign policy” released following Canada’s United Nations Security Council defeat in June. Signed by David Suzuki, Naomi Klein, Stephen Lewis and four sitting MPs and numerous former MPs, one of its 10 questions asks, “Why is Canada involved in efforts to overthrow Venezuela’s UN-recognized government, a clear violation of the principle of non-intervention in other country’s internal affairs?”

Canadians should debate this question. We should ask ourselves whether we will continue to accept our government’s participation in the Trump administration’s devastating regime change effort in Venezuela. More broadly, Canadians need to evaluate why our government appears indifferent to rights violations committed by pro-corporate and U.S. governments while obsessing over (real or perceived) abuses in countries governed by socialistic and nationalistic politicians.

In response to the Bolivian election, the Canadian Latin America Alliance released a statement declaring, “For our part, Canadians of Latin American descent want our government to cease its ideologically motivated positions vis a vis the hemisphere, and commit to respect the sovereignty and democratic will of people in Latin America and the Caribbean.” Most people living in Canada want their country to be a force for peace and human rights in the world, and would likely agree with this appeal.

Bianca Mugyenyi is an author and former co-executive director of The Leap. She currently directs the Canadian Foreign Policy Institute.