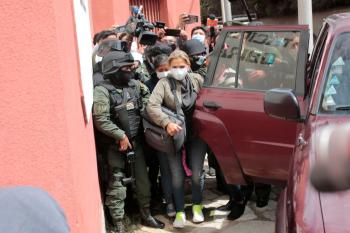 The Canadian government supported the failed coup against Evo Morales.

Last week, Bolivian president Luis Arce made his first state visit. He traveled to Mexico, where President Andrés Manuel López Obrador condemned the coup of 2019 in Bolivia. Jointly, the two heads of state called on the Organization of American States (OAS), the organization that promoted the coup, “to respect democracy and not intervene in the internal affairs of sovereign countries.”

The fight for sovereignty continues today in Bolivia — as it does in Mexico — even after progressive government has been democratically returned to power after a general election last year. Former “interim” president Jeanine Áñez, as well as some of her closest associates, were arrested by Bolivian police last month, charged for crimes while in power. For the OAS and many in the international press, these arrests have been willfully misconstrued as revenge from the governing party, the Movement Toward Socialism (MAS). But the violence of the coup regime demands to be brought to justice, and this is rightfully what is finally occurring.

When Jeanine Áñez’s regime ousted former president Evo Morales in November 2019, it wrought violence across the country. Protests in support of Morales seeking to protect his presidency were met with torture and bullets in an effort to consolidate a right-wing government.

At the massacres of Sacaba and Senkata, thirty-six people were killed. These particular massacres were investigated and condemned by the Inter-American Commission on Human Rights, which began the painstaking process of securing permission from the interim government to undertake a proper investigation and to propose a path toward reparation for the victims. Less eminent attention has been given to smaller massacres, individual deaths, at least one thousand arrests, and over eight hundred injuries caused by the de facto regime. Anyone who had the fortitude could watch the bloodshed on their cellphones, being filmed by citizens since reporters had been largely silenced through terror.

Since the first days of the coup, indigenous groups, the urban poor, international human rights organizations, and others have been demanding that the perpetrators be brought to justice. Indeed, this demand was critical to returning the Movement Toward Socialism (MAS) to power with a majority of 55 percent at last October’s general election.

On March 13 in the early hours of the morning, Áñez was finally found and arrested by an elite unit of the police force. Also arrested were several former ministers and ex-commanders of the security forces. By March 15, nine charges had been filed against Áñez including usurpation of the presidency, the matter of an improperly contracted credit of 24 million dollars from the International Monetary Fund, and Supreme Decree 4200 that criminalized civil liberties using the pandemic as a pretext. The Senate, for its part, has brought twenty-two investigations against coup regime authorities for alleged illegal actions while in office.

Since the arrest, testimonies of people tortured, shot, and pistol-whipped over the course of Áñez’s time in power, as well as filmed evidence of the de facto government’s violence, have been aired on progressive media and government channels. One clip on the news showed a woman with a red COVID-19 mask congratulating Áñez for “the coup.” They were seated with others at a conference table in an elegant room, and Áñez said nothing to contest the use of the word “coup.” Another clip showed her minister of interior reviewing armored vehicles in a central plaza at night. Someone was surreptitiously taping him as he said in a low voice, “These are the ones that fired in Senkata, right?”

“To Be Indigenous, for Them It’s a Crime”

The woman who launched the criminal lawsuit against the heads of the coup government is Lidia Patty. She filed a case against several figures, among them a key leader of right-wing paramilitary initiatives, Luis Fernando Camacho; the sinister Arturo Murillo; the former head of police; and Áñez’s former minister and personal assistant, Yerko Núñez.

An indigenous Quechua woman and elected senator in the last MAS government, Patty was among those who refused to resign with the coup. On March 15, Patty spoke on public radio and television networks: “There were tortures, protesters had their fingers cut off. Women in the protests were man-handled by the soldiers, their intimate parts groped — just like in colonial times. In the jail cells, our sisters were raped.”

She spoke of the coup regime’s racism toward indigenous and peasant representatives in parliament, where they were told, “you are our domestics” and “go home to your kitchens.”

When she left office after finishing her term in 2020, Patty chose to file the lawsuit as a private citizen against Áñez.

“They wanted to shut down parliament,” which had a two-thirds MAS majority. “After the coup against the president, they aimed to pull off a coup against parliament.” MAS assembly members were finally able to force their way into the building, then “legislators slept on the floor of assembly for seven days. If we had failed to do that, we, too, would have been accomplices of the coup.” She returns to the present: “We cannot let them do this again. I am not persecuting anyone, what I want is justice.”

Standing Up to the OAS

In response to the lawsuits against Áñez and her associates, the OAS has reacted in a manner that, for anyone who has followed Bolivian politics in recent years, will not be surprising. In an effort to draw a false equivalence, it announced that it would be launching an international investigation into corruption of both the Áñez government and the previous Morales government. Furthermore, it insisted that the entire Bolivian justice system should be overhauled by international actors.

The corruption charges are certainly true with reference to the coup regime, but not in the case of the Morales regime. Indeed, it was under Morales that corruption was prosecuted and its eradication was central to the platform of the 2019 MAS campaign.

The MAS Senate majority is increasingly outraged by what it terms OAS “interventionism,” and has registered a formal complaint. Moreover, on March 16, Bolivian minister of Justice Iván Lima announced the government’s intention to file charges against the OAS’s head, Luis Almagro, due to his failure to respect OAS conventions signed with Bolivia.

A few days later, one member of the Supreme Electoral Tribunal urged his fellow members to disinvite the OAS from conducting an observer mission during the second round of gubernatorial elections. Salvador Romero, the Áñez-appointed head of the electoral court, roundly rejected the idea.

For their part, progressive Latin American governments are working to strengthen non-interventionist diplomacy. Mexico and Argentina, as well as Latin America’s block of ten progressive nations (the Bolivarian Alternative for Latin America and the Caribbean, or ALBA for short), and Parlasur — the parliamentary body of the Mercosur trade block — have all raised their voices in defense of Bolivia’s elected MAS government. They argue that the OAS’s false claims of fraud opened the door to the bloody coup regime of Jeanine Áñez.

The international right wing and its Bolivian partners have been fueling the fires of alleged fraud for almost a decade. Repetition of the unproven allegations is gospel among many in the middle sectors. Eight expert studies from US universities — including ones commissioned by the New York Times and headlined by the Washington Post — assert that there is no basis for claiming fraud in the last two national elections in Bolivia.

The Right often accuses its enemies of the crimes that it itself commits. Its demonization of Evo Morales is carnivalesque, and it now claims that he is plotting to unleash a civil war so he can return to the presidency. If history is any guide, we know that it is the United States, with the OAS as its puppet, that is responsible for instigating civil wars. Their man in Bolivia is planted at the helm of the electoral court, Salvador Romero.

As Inocencia Franco of the Bartolina Sisa women’s federation in the lowland community of Yacuiba has put it: “We have shed our blood for this democracy.” Though it is peace that people are after, they are also ready to defend if need be their new democratically elected president, Luis Arce. “Every community is on an emergency footing, and we will stand strong.”

Cindy Forster is a professor of Latin American studies at Scripps College.