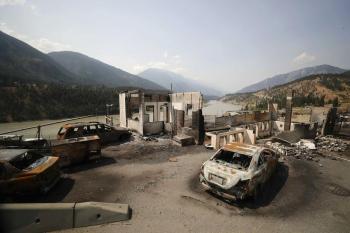 The town of Lytton, B.C. broke Canada’s all-time temperature record three days in a row; the next day it was wiped from the map by a forest fire. The message from Mother Nature was unmistakable: “Act immediately to mitigate climate change.”

To heed nature’s warning, I propose the “Lytton test.”

Whatever we’re planning to do collectively, we must ask: Will this help avoid another Lytton? Will it provide protection during another Lytton-like event? Does it consume resources that would be better spent mitigating the climate crisis?

If we utilize this test on the spectacularly expensive purchase of 88 new fighter jets, the Liberal’s plan fails on all three fronts.

Fighter jets can’t protect us from another Lytton-like catastrophe. They can’t extinguish fires, carry personnel to disaster zones or offer effective search and rescue. They are offensive weapons designed to enhance the Canadian Air Force’s ability to participate in future U.S. and NATO-led wars.

Rather than protect Canadians from the devastation experienced by the people of Lytton, purchasing cutting-edge fighter jets increases the likelihood of another climate disaster.

To fly at high speeds and altitudes, fighter jets consume incredible amounts of specialized fuel. The heavy carbon-emitting fuels’ high-altitude release point also has a greater warming effect. Most fuel is consumed in training, but during the 2011 bombing of Libya, the Air Force’s jets consumed 8.5 million litres of fuel.

The planned purchase would be the second largest procurement in Canadian history, diverting resources from efforts to mitigate the prospect of future Lyttons. The government says it plans to spend $19 billion on new jets. But that’s just the sticker price. Depending on whether they select Lockheed Martin’s F-35 stealth fighter, Saab’s Gripen or Boeing’s Super Hornet, the true cost could be four times greater. According to a recent report released by the No Fighter Jets Coalition, the life cycle cost is estimated at $77 billion. Those resources could turbocharge a just transition away from fossil fuels.

Moving forward with this purchase is a decision we will soon regret. Fortunately, there’s growing opposition.

A public letter released this week by the Canadian Foreign Policy Institute and the Canadian Voice of Women for Peace opposes the purchase. “As wildfires blaze in Western Canada amidst record breaking heat waves, the Liberal government is planning to spend tens of billions of dollars on unnecessary, dangerous, climate-destroying fighter jets,” begins a letter addressed to Trudeau.

Bianca Mugyenyi is director of the Canadian Foreign Policy Institute.