Canada does not deserve seat at UN Security Council 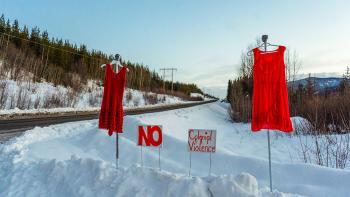 Reconciliation is dead. It died when the RCMP invaded Wet’suwet’en territory with heavy machinery, helicopters, weapons and police dogs to forcibly remove Wet’suwet’en peoples and supporters from their homes on their own lands.

In quite literal terms, the RCMP destroyed the “reconciliation” sign posted on the access point to the territory, to make way for pipeline workers to force a pipeline on Wet’suwet’en Yintah (lands) without consent from hereditary chiefs.

While they were at it, Coastal Gaslink pipeline workers removed the red dresses memorializing the thousands of Indigenous women and girls who have been abused, exploited, disappeared and murdered – some at the hands of those who work in man camps.

In reaction to this violation of Indigenous land rights and the aggressive invasion of Wet’suwet’en lands by the RCMP, grassroots Indigenous peoples and Canadian allies have engaged in protests, rallies, marches and blockades all over Turtle Island.

Meanwhile, Liberal Prime Minister Justin Trudeau is not even in Canada. He is travelling the world campaigning for a seat on the United Nations (UN) Security Council.

Canada is a state perpetrator of genocide against Indigenous women and girls. The national inquiry found that all levels of government – federal, provincial, territorial and municipal – have engaged in historic and ongoing genocide; a form of gendered colonization which targets Indigenous women and girls for violence and denies them basic human rights protections. This genocide includes the theft of Indigenous lands and resources and the criminalization of Indigenous peoples who peacefully defend their lands and peoples from the violence, especially from the extractive industry.

The UN Security Council should not welcome a state perpetrator of genocide that has failed to accept responsibility for the genocide and failed to act urgently to end it. Similarly, member states of the UN should recall that Canada was one of only four states that fought against the United Nations Declaration on the Rights of Indigenous Peoples (UNDRIP) which protects the rights of Indigenous peoples to self-determination, control over their traditional lands and resources and protections from forced removal from their lands by the state. While Canada has reversed its position on UNDRIP and claims to now support it unconditionally, it has failed to implement it into domestic law (with the exception of the Province of British Columbia).

The UN Security Council’s mandate is to maintain international peace and security. They are responsible to identify threats to peace or acts of aggression and have the authority to impose sanctions or authorize intervention. The Council has 15 members, five are permanent (China, Russia, France, United Kingdom and the United States) and ten are non-permanent and replaced on a rotating basis. Canada is vying for one of five seats that will be elected in June alongside other countries like Norway and Ireland. Canada lost its seat under the former Conservative Prime Minister Stephen Harper. To this end, Trudeau is campaigning on the African continent and will soon be headed to the Caribbean and eventually Germany to make his case.

Yet, it is hard to contemplate how the member states of the UN could vote for Canada given its record of human rights abuses and genocide of Indigenous peoples. Keep in mind that both the UN and the Organization of American States (OAS) have shared their grave concerns about the National Inquiry into Murdered and Missing Indigenous Women and Girls finding of ongoing genocide in Canada. The UN Committee for the Elimination of Racial Discrimination (UNCERD) has also asked Canada to urgently withdraw the RCMP and weapons from Wet’suwet’en territory and to halt any major development projects on Indigenous territories unless they have consent.

The UN member states should also consider that Canada has continuously failed to act on the numerous recommendations from various UN human rights treaty bodies pleading with Canada to end its grave human rights violations against Indigenous peoples, especially Indigenous women. Whether it is the UNCERD, UN Human Rights Council, UN Committee for the Elimination of Discrimination Against Women (CEDAW), Canada consistently fails to remedy these serious human rights breaches.

While there will be many other political considerations that go into each UN member state’s decision as to whether to support Canada’s bid for a seat on the UN Security Council, Canada’s record of ongoing genocide and human rights abuses against Indigenous peoples, and its recent armed invasion of Wet’suwet’en territory should give them pause. Canada has long pointed fingers around the world, criticizing human rights breaches, yet it has failed to address its own – and it’s killing our people.

Canada does not deserve a seat at the UN Security Council unless and until they address peace and security in their own country. Indigenous women and girls continue to disappear and be murdered, Indigenous peoples are grossly overincarcerated, and our children are stolen into the foster care system at rates higher than during residential schools.

Our lands and waters are being destroyed by massive development and extractive projects without regard for the cost to the planet or human lives. Canada’s continued acts of genocide and ecocide will eventually impact other states as climate change cannot be contained within artificial political borders. The planet is in crisis and the UN Security Council will have to face ever growing threats to peace and security worldwide. The last thing they need is to be guided by states that don’t address their own human rights, peace and security issues.

Pamela Palmater is a Mi’kmaw citizen and member of the Eel River Bar First Nation in northern New Brunswick. She has been a practicing lawyer for 20 years and currently holds the position of Professor and Chair in Indigenous Governance at Ryerson University.