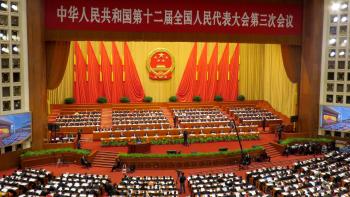 Professor Radhika Desai: Author & Professor of Political Studies at the University of Manitoba. Mme. LU Xu: China’s Consul General in Calgary. Prior to her appointment to Canada, she was Deputy Director General of Consular Affairs of China’s Ministry of Foreign Affairs. Omar Latif: A long-time activist based in Toronto, he has travelled extensively across the world, including twice to China. Omar visited Xinjiang in the summer of 2019. Max Blumenthal: is an award winning investigative journalist, author, and filmmaker.

Max Blumenthal and Ben Norton (kind of) speak with Daniel Dumbrill, a Canadian YouTuber who has lived in China for more than a decade, about the new cold war. He debunks the anti-Chinese myths constantly spread in the Western corporate media.

Inside the World Uyghur Congress: The US-backed right-wing regime-change network seeking the ‘fall of China’

A central gear in Washington’s new Cold War against China, this network has a long history of relationships with the US national security state and far-right ultra-nationalists.

At the heart of this movement is the World Uyghur Congress (WUC), an international Uyghur organization that claims to be engaged in a “peaceful, nonviolent, and democratic” struggle for “human rights.” The WUC considers China’s northwestern Xinjiang region to be East Turkestan, and sees its Uyghur Muslim inhabitants not as Chinese citizens but instead as members of a pan-Turkic nation stretching from Central Asia to Turkey.

As this investigation establishes, the WUC is not a grassroots movement, but a US government-backed umbrella for several Washington-based outfits that also rely heavily on US funding and direction. Today, it is the main face and voice of a separatist operation dedicated to destabilizing the Xinjiang region of China and ultimately toppling the Chinese government.

Veteran US diplomat: US confronts China to protect supremacy, not security

Veteran US diplomat Chas Freeman says that despite talk of a New Cold War between the US and China, the US in reality is reacting aggressively to a rising Chinese power whose economic gains threaten US global supremacy. Freeman, who served in top State Department positions and as Richard Nixon's chief interpreter on his historic 1972 visit to China, discusses the state of US-China relations and flashpoints such as Hong Kong, Taiwan, and the repression of Uyghur Muslims in Xinjiang.

'This is not a concentration camp': Analyst Victor Gao on China's Uighur prisons

No, the UN did not report China has ‘massive internment camps’ for Uighur Muslims

A spokesperson from the UN Office of the High Commissioner for Human Rights (OHCHR) confirmed in a statement to The Grayzone that the allegation of Chinese “camps” was not made by the United Nations, but rather by a member of an independent committee that does not speak for the UN as a whole. That member happened to be the only American on the committee, and one with no background of scholarship or research on China.

Moreover, this accusation is based on the thinly sourced reports of a Chinese opposition group that is funded by the American government’s regime-change arm and is closely tied to exiled pro-US activists. There have been numerous reports of discrimination against Uighur Muslims in China. However, information about camps containing 1 million prisoners has originated almost exclusively from media outlets and organizations funded and weaponized by the US government to turn up the heat on Beijing.