Canada to Guinea Refugees: We want your bauxite but we don’t want you 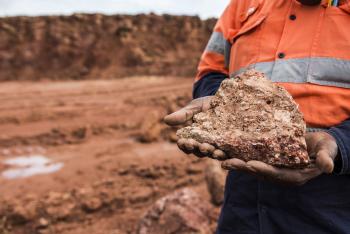 If you take a nation’s mineral resources do you have a moral responsibility to also accept its people?

On Sunday about 40 people rallied outside a Montreal Metro station against deportations to Guinea. The protesters called on Prime Minister Justin Trudeau to live up to his “Welcome to Canada” rhetoric and allow asylum seekers from the small West African nation to stay.

After a de-facto amnesty on deportations between 2013 and 2016, requests for asylum by Guineans have been refused en masse since December. According to the Refugee and Immigration Board, 10 Guineans in Canada have had their asylum rejected since June 30. Sixty-three claimants from the impoverished country are currently pending.

Rally organizers cited corporate Canada’s exploitation of the mineral rich nation as a rationale for why asylum seekers should be allowed to stay. Certainly, in a number of ways, this country has contributed to the impoverishment that drives Guineans to seek a better life elsewhere.

A handful of Canadian mining companies operate in the small West African nation and to strengthen their hand Ottawa signed a Foreign Investment and Protection Agreement with Guinea in 2015. At least two Canadian resource companies have engendered significant conflict and controversy in Guinea.

Those living near SEMAFO’s Kiniero mine, reported Guinée News in 2014, felt “the Canadian company brought more misfortune than benefits.” In 2008 the military killed three in a bid to drive away small-scale miners from its mine in southeast Guinea. BBC Monitoring Africa reported “the soldiers shot a woman at close range, burned a baby and in the panic another woman and her baby fell into a gold mining pit and a man fell fatally from his motor while running away from the rangers.”  Blaming the Montréal-based company for the killings, locals damaged its equipment.

In September 2011 protests flared again over the company’s failure to hire local young people and the dissolution of a committee that spent community development monies. Demonstrators attacked SEMAFO’s facilities, causing hundreds of thousands of dollars in damage.  Some also targeted a bus carrying company employees, prompting the authorities to evacuate all expatriate staff to Bamako in neighbouring Mali.

In 2014 the Guinean government’s Comité Technique de Revue des Titres et Conventions Miniers concluded that the Montréal firm evaded $9.6 million in tax. The Comité Technique also found that the company failed “to produce detailed feasibility studies” and was not “in compliance with new measures in the 2011 mining code.”  The Comité Technique recommended that SEMAFO be fined and stripped of its mining rights in the country. Later that year SEMAFO sold the Kiniero mine.

Canadian mining interest in the country dates back to the colonial period. In 1916 Montreal-based Alcan started exploring in Guinea and a dozen years later began operating through a French subsidiary. In 1938 Alcan opened a bauxite mine on the Island of Tamara in the Isles de Los. (In 1904 London gave the island — and some other African territory — to France in exchange for its relinquishment of fishing rights in Newfoundland, which included the right to dry cod on land.) To construct a wharf on this island just off the coast of Conakry the Canadian company turned to the colonial penal system with most of the 170 workmen pressed into service from the local penitentiary.

Fifteen years later Alcan opened a modern plant on the island to supply its smelters in Québec. Les Mines et la Recherche Minière en Afrique Occidentale Française describes the island just off the Guinea coast as “a Canadian enclave” at the beginning of production in 1951. Alcan employed some 1,200 workers to build the site with the African labourers paid 5,000 Fr. ($20 Canadian) a month.

In 1953 the director of mines for French West Africa granted Alcan exclusive prospecting rights over 2,000 square kilometres of territory in Western Guinea. The company discovered one of the richest bauxite deposits in the world in the Boké region. During a 1956 visit to France’s West African colonies Canada’s ambassador to France, Jean Désy, inspected the nascent Boké site.

After Guinea’s 1958 independence the Boké project became highly contentious. In January 1961 much of the workforce went on a weeklong strike to demand the dismissal of a dozen white managers. Later that year the mine was nationalized. In Negotiating the Bauxite/Aluminium Sector under Narrowing Constraints Bonnie K. Campbell notes, “in November 1961, the government took possession of the Kassa and Boké sites because of the failure of the private firm, Les Bauxites du Midi (a 100% subsidiary of Alcan) to observe its agreement to transform locally bauxite to alumina by 1964.” When the government voided its contract, Alcan illegally secreted out company files from Guinea.

Alcan (now Rio Tinto Alcan) maintains a presence in the country with the largest known bauxite reserves in the world. While Guinea has extracted significant quantities of the mineral, it has almost all been refined into aluminum elsewhere.

Conversely, bauxite isn’t mined in Canada, but this country has long been among the leading producers of the valuable metal. Dependent on cheap electricity from dams built on indigenous land, Québec aluminum smelters have refined significant amounts of Guinean bauxite. The divide between bauxite/aluminum and its extraction/production has traditionally reflected an extremely hierarchical world economy — shaped by the transatlantic slave trade, European colonialism, structural adjustment, etc. — in which the poor provide the minerals and those at the top carry out the value-added production.

The exploitation of Guinean resources in this fashion has quite clearly benefited Canadian corporations and created jobs in this country rather than in the place where the bauxite originated.

Therefore the answer to the question posed at the beginning of this article is yes. Ottawa’s role in shaping the hierarchical international economic system and corporate Canada’s extraction of Guinean resources should be factors considered in assessing every Guinean’s request for asylum in this country.