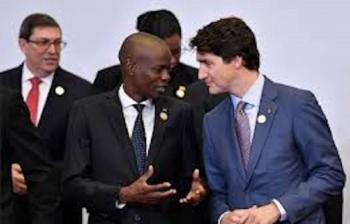 Add this to the “you can’t make this stuff up” file: Canada’s foreign minister recently met his Haitian counterpart, who is part of a de facto administration illegally rewriting the constitution, to discuss Venezuela’s supposed democracy deficiency. Apparently, Ottawa wants a Haitian regime extending its term and criminalizing protest to maintain its support for Juan Guaidó as “constitutional” president of Venezuela.

Last week foreign affairs minister François-Philippe Champagne spoke with his Haitian counterpart Claude Joseph. According to Champagne’s tweet about the conversation, they discussed COVID-19, Haiti’s elections and Venezuela. Presumably, Champagne relayed Ottawa’s position concerning Venezuela’s recent National Assembly elections, which delivered a final blow to opposition politician Guaidó’s farcical presidential claims. In August Joseph met his US and Canadian patrons in Washington on the sidelines of an anti-Venezuela Lima Group meeting. In response Haïti Liberté’s Kim Ives noted, “what could be more ironic and ludicrous than Haiti’s President Jovenel Moïse accusing Venezuela’s President Nicolas Maduro of being ‘illegitimate and dictatorial’ while demanding that he immediately ‘hold free, fair, and transparent general elections’? But that is exactly the position of the Lima Group, a collection of 15 Latin American states and Canada, which Haiti joined in January 2020.”

Joseph is the representative of a prime minister appointed extra-constitutionally. His boss was picked by Moïse after parliament, which needs to endorse a prime minister, expired because the president failed to organize elections. Moïse is ruling by decree and pushing to extend his term by a year to February 7, 2022, against the wishes of most Haitians and constitutional experts.

Canada is essentially supporting Moïse’s bid to extend his mandate. Ottawa is also supporting an election process that most political actors in Haiti reject. In the summer Haiti’s entire nine person electoral council resigned in response to Moïse’s pressure and few believe a fair election is possible under his direction.

Canada is backing the elections and an illegal constitutional rewrite. After the call with Champagne, Joseph tweeted, “I had a fruitful conversation today with my Canadian counterpart François-Philippe Champagne. We discussed, among other things, Canada’s support for constitutional reform and the holding of elections in 2021.”

Moïse is seeking to rewrite the constitution. Soon after parliament was disbanded, he picked individuals to rewrite the constitution in flagrant violation of the law. Moïse appointed former Supreme Court justice Boniface Alexandre to head the constitutional rewrite. Alexandre was made figurehead “President” after the US, France and Canada overthrew elected president Jean-Bertrand Aristide in 2004. In another throwback to a period that saw thousands killed in political violence, Moïse recently made Léon Charles head of police. The former military man oversaw the police in the 17 months after the 2004 coup with Charles publicly referring to the “war” the police waged against the pro-democracy sector.

In another regressive throwback, Moïse unilaterally decreed the creation of a new National Intelligence Agency at the end of November. Kim Ives explains, “this secret agency’s completely anonymous officers (Article 43) will have false identities (Article 44), carry guns (Article 51), be legally untouchable (Article 49), and have the power not just to spy and infiltrate but to arrest anybody engaged in ‘subversive’ acts (Article 29) or threatening ‘state security’ i.e. the power of President Jovenel Moïse.” The new agency appears analogous to the Duvalier dictatorship’s Volontaires de la Sécurité Nationale (Ton Ton Macoutes) or the Service d’Intelligence National the CIA created after Baby Doc fled in 1986. Supposed to fight the cocaine trade, SIN members were involved in hundreds of murders in subsequent years.

Even most of Moïse’s foreign patrons have nominally distanced themselves from the new intelligence agency, which reach beyond the constitutional powers of the president. The Core Group, a US and Canada led alliance of foreign ambassadors that heavily influences Haitian affairs, released a statement critical of Moïse’s intelligence agency decree. (But, I could not find a mention of the Core Group statement on either the Canadian ambassador or Canada in Haiti Twitter accounts.)

As it seeks to overthrow Nicolás Maduro for purported human rights violations and democratic deficiencies, the Trudeau government has endorsed Moïse’s repressive measures. After a meeting with the president, Canada’s ambassador Stuart Savage tweeted on December 10: “Important discussion with Jovenel Moïse on this International Human Rights Day on the subject of democratic renewal, rule of law and food security.” Savage failed to criticize Moïse’s bid to extend his term, rewrite the constitution, establish an intelligence agency or label road blockades “terrorism”.

Even before these recent unconstitutional measures, partnering with Moïse to demand Maduro follow Canada’s interpretation of the Venezuelan constitution was laughable. Moïse is the hand-picked successor of Michel Martelly who the US, Canada and Organization of American States inserted into the presidency after the horrific 2010 earthquake. A relatively obscure businessman who had never held public office, Moïse benefited from two million dollars in public funds (ironically stolen from Venezuelan assistance) funneled his way by the Martelly administration. According to official figures, Moïse received 595,000 votes — just 9.6 percent of registered voters in the 2016 election. (For his part, Maduro received the support of 27% of registered voters in the May 2018 presidential election.)

Moïse faced an unprecedented popular uprising against his presidency between July 2018 and late 2019. The country’s urban areas were paralyzed by a handful of general strikes, including one that largely shuttered Port-au-Prince for a month. The only reason the unpopular president is still in office is because of diplomatic, financial and policing support from Ottawa and Washington.

Shining a light on Canadian policy towards Haiti makes clear that its bid to replace Maduro as President of Venezuela is not about democracy. Ottawa is completely comfortable with an undemocratic government in Haiti.

Yves Engler’s latest book is ‪Canada in Africa: 300 years of Aid and Exploitation.