Canada has been Washington’s assistant in Haiti, not its foil 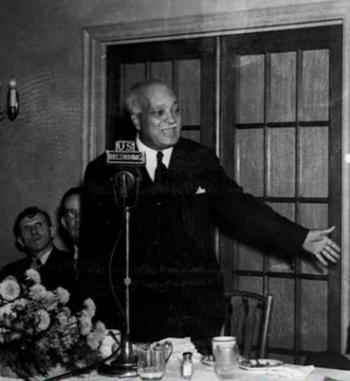 Haitian President Elie Lescot speaking in the U.S. in October 1943. His presidency was largely the product of U.S. influence in the country.

Le Devoir’s Christian Rioux is right to highlight the ruinous nature of U.S. power in Haiti. But, he’s wrong to focus on Black American cultural influence or to suggest Québec has challenged U.S. power there.

The Paris-based correspondent’s criticism of Black American cultural influence in Haiti is bizarre. While it is important to question all elements of the U.S.’s immense power over that country, other manifestations of American power are far more damaging.

ANYONE GENUINELY CONCERNED ABOUT HAITI MUST CHALLENGE U.S. POWER THERE

Rioux’s suggestion that Haitians look to Québec as a counterweight to U.S./Anglo dominance is the most important element of his much-criticized story to unravel. To make his point, Rioux reaches back to the 1943 visit of Haitian president Élie Lescot to Canada. During his trip, Lescot received an honorary degree from l’Université de Laval and was feted by Québec Premier Adélard Godbout. But, complains Rioux, Lescot received a much frostier reception from Prime Minister McKenzie King in Ottawa, supposedly reflecting Anglo indifference to Haiti.

But, Lescot’s presidency was largely the product of U.S. influence in the country. A member of Haiti’s comprador bourgeoisie, Lescot took power not long after the end of the U.S. military occupation, and throughout his time as president, the U.S. controlled the Banque de la République d’Haïti, the country’s central bank. In partnership with the U.S., Lescot expelled peasants from more than 100,000 hectares, razing their homes and destroying more than a million fruit trees in an ultimately unsuccessful effort to cultivate rubber for the U.S. war machine. He deepened the U.S.-created Army’s repressive Section Chief system in rural areas, and Lescot was close to Dominican dictator Rafael Trujillo, who ordered the 1937 slaughter of 20,000 Haitians out of fear they were “darkening” his country.

Lescot’s visit to Québec, notes Sean Mills in A Place in the Sun: Haiti, Haitians, and the Remaking of Quebec, reflected the growing ties between Catholic, French-speaking Québecers and the Haitian elite. They were generally hostile towards the overwhelming majority of Kreyòl speaking, vodou practicing, moun andeyò (country people). In 1941-42, Lescot supported the Catholic church’s anti-superstition campaign that targeted vodou practitioners for arrest, beatings, and even death.

In 1946 Lescot was ousted by a worker/student/peasant uprising in what historian Laurent Dubois, author of Haiti: The Aftershocks of History, describes as the first successful popular overthrow of a U.S.-backed regime in the Americas.

Lescot’s ouster ushered in a social reformist government. The first black president since the U.S. occupied the country in 1915, Dumarsais Estimé substantially increased the number of black professionals in cabinet and civil service positions.

Québec’s support for Lescot didn’t benefit most Haitians. Nor did it challenge U.S. dominance over the country.

To take a more recent example, the same can be said for Quebec Premier Jean Charest’s meeting with Prime Minister Gerard Latortue at his Montréal office in 2006. After living in Florida for many years, Latortue was installed following the U.S.-led ouster of thousands of elected officials, including President Jean Bertrand Aristide, in 2004. Charest’s diplomatic support for Latortue reinforced, rather than undermined, Washington’s grip over the country.

Anyone genuinely concerned about Haiti must challenge U.S. power there. As such, Solidarity Québec Haiti is rallying in front of the U.S. Consulate on July 28 to mark the 105th anniversary of its first brutal military occupation. Washington — backed by Canada/Québec — continues to largely determine Haitian affairs. The only reason, for instance, the corrupt and repressive Jovenel Moïse remains president is because of U.S. backing.

In a future column, Rioux should look beyond the threats posed by hip-hop and investigate the deleterious impact U.S. diplomatic, aid, military, and intelligence officials have had and continue to have in Haiti.