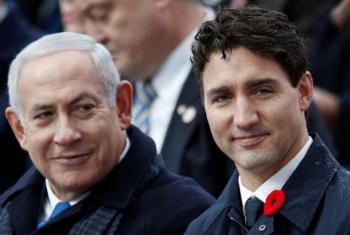 The Canadian government has submitted a letter to the International Criminal Court (ICC), in which it declared support for the Israeli position, thus rejecting the ICC jurisdiction over cases of alleged war crimes committed by Israel in Palestine.

The Canadian Jewish News (CJN), which reported on the letter, said that Ottawa has communicated its position to the Court on February 14, although the content of the letter has not been made public until today.

In the letter, Canada, which reminded the Court that its “financial contribution to the ICC will be $10.6 million this year,” stated that it does not recognize Palestine as a state and that the ICC has no jurisdiction on the case that is presented by the State of Palestine.

The Canadian decision followed a public demand last December by Israeli Prime Minister Benjamin Netanyahu to Canadian Prime Minister Justin Trudeau to condemn a preliminary report by the ICC that has a “reasonable basis” to investigate Israeli war crimes in the occupied territories.

Netanyahu’s letter, which was obtained by the Canadian Globe and Mail newspaper, asserted the position which was eventually adopted by the Canadian government, that the ICC has no jurisdiction over the case because Palestine does not meet the criteria of statehood.

“In light of our special relations and the steadfast friendship between our countries, I urge you to publicly condemn this erroneous decision, to acknowledge there is not a Palestinian state, that the court has no jurisdiction in this matter, which involves political issues to be determined by the parties, and to voice your deep concerns regarding its dangerous ramifications to the court and the region.”

The intense Israeli lobbying followed a statement by the ICC chief prosecutor Fatou Bensouda, in which she declared to be “satisfied that there is a reasonable basis to proceed with an investigation into the situation in Palestine”.

“In brief, I am satisfied that war crimes have been or are being committed in the West Bank, including East Jerusalem, and the Gaza Strip,” she said.

Two days after Ottawa communicated its position to the ICC, Netanyahu praised what he called “efforts” by “friendly states” to prevent the ICC from launching an investigation.