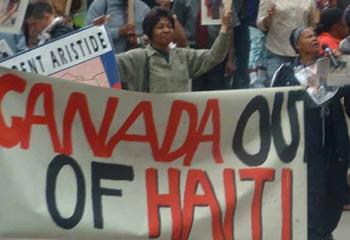 Canada is a major player in a coalition shaping the fate of 11 million Haitians, yet few citizens of this country have even heard of the Core Group.

Recently, the Core Group -- which includes foreign representatives of the U.S., Canada, France, Spain, Germany, Brazil, as well as the United Nations and the Organization of American States) published a note saying Ariel Henry was the prime minister of Haiti. Henry has no constitutional legitimacy as he was named by a (now dead) president whose mandate had expired. Henry was also not approved by Parliament and there's little sign that Henry is popular. Still, the Core Group succeeded in having the other individual claiming to be prime minister quickly fall into line behind Henry.

A coalition of foreign ambassadors that periodically release statements on Haitian affairs, the Core Group is nakedly imperialist. If you doubt this truth, just imagine the Jamaican, Congolese, Guatemalan and Filipino ambassadors releasing a collective statement on who should be prime minister of Canada. Remarking on the racial dimension, Haitians on social media often contrast the skin tone of Core Group ambassadors to most Haitians.

Some have labeled a group that meets regularly with Haitian officials a "fourth branch" of the Haitian government. But the Core Group's success at rallying government factions behind Ariel Henry demonstrates its influence may be greater than that.

In a sign of the divide between the imperial centre and periphery, there's a remarkable gulf in awareness of the Core Group between those dictated to and those who dictate.

Outside of the Haitian community, very few Canadians have even heard of the Core Group. I'd wager 99 per cent of regular readers of "serious" Canadian newspapers haven't heard of it and the same for 90 per cent of international affairs academics.

The same cannot be said of Canadian media. A recent search of the Globe and Mail and National Post databases found only one mention of the Core Group in its 17 years of existence.

The Core Group was officially established by a UN Security Council resolution on April 30, 2004. That resolution replaced the two-month-old Multinational Interim Force -- created after U.S., Canadian and French troops invaded to overthrow the elected government -- with the United Nations Stabilization Mission in Haiti (MINUSTAH), which occupied the country for 15 years. Point five of the resolution:

"supports the establishment of a Core Group chaired by the Special Representative and comprising also his/her Deputies, the Force Commander, representatives of OAS and CARICOM, other regional and subregional organizations, international financial institutions and other major stakeholders, in order to facilitate the implementation of MINUSTAH's mandate, promote interaction with the Haitian authorities as partners, and to enhance the effectiveness of the international community's response in Haiti."

While it is specifically cited in the UN resolution, CARICOM (Caribbean Community) hasn't played much of a role in the Core Group, John Reginald Dumas recently explained. He is a Trinidadian diplomat who was the UN Secretary-General's Special Adviser on Haiti at the time of the Core Group's creation.

Unofficially, the Core Group traces its roots to the 2003 "Ottawa Initiative on Haiti" meeting. In a rare major media look at that private meeting, Radio Canada's Enquête pointed out that the Core Group was spawned at the "Ottawa initiative on Haiti." Held at the Meech Lake government resort on January 31 and February 1, 2003, no Haitian officials were invited to a gathering where U.S., French, OAS and Canadian officials discussed overthrowing Haiti's elected government, putting the country under UN trusteeship and recreating the Haitian military, which largely transpired a year later.

The Core Group seeks to dictate Haitian affairs. But it's also a forum for the bigger bullies to ensure the lesser bullies toe the line.

When the U.S., France and Canada invaded in 2004, they didn't want to keep their troops in Haiti long term. They pressed the UN, especially Brazil, to take over. But they didn't want Brazil, which led MINUSTAH, or the UN to become an independent force in Haiti. That might enable popular and anti-imperialist forces.

As a result, the Core Group seeks to minimize division between the foreign powers because dissent of that sort generally benefits Haiti's impoverished majority. For example, when the 2004–2006 coup government finally held elections, the Core Group tried to block former social democratic president René Préval from winning. As counting dragged on for a week thousands of marked ballots were discovered half-burned in a garbage dump outside of Port-au-Prince. The apparently stolen ballots added fuel to simmering discontent with the coup government's bid to rig the election against Préval. An explosion of protest following their discovery led to division among the primary foreign actors in Haiti. The U.S., French and Canadian ambassadors insisted the electoral council continue counting votes to force a second round while Brazil and Chile, as well as the UN representative, wanted to grant Préval a first-round victory. The U.S./France/Canada were forced to concede.

Having learned their lesson, the Core Group now seeks to lessen the room for popular, anti-imperialist forces to maneuver. Hence the note anointing the new prime minister. A key characteristic of imperial control is making clear who is running the show.

Many Canadians celebrate the supposed fact that their country has never been an imperialist power. Perhaps it is time for them to revisit their beliefs about Canada's role in the world.

Yves Engler is the author of 11 books. His Stand on Guard For Whom? — A People's History of the Canadian Military is available next month.