Canada is not a safe haven for asylum seekers, Trudeau warns 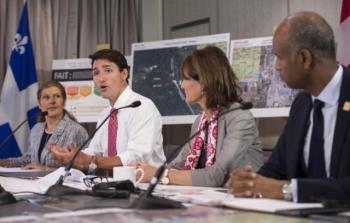 Canada is no automatic safe haven for those seeking quick entry into the country or fleeing the threat of imminent deportation from the United States, says Prime Minister Justin Trudeau.

After a meeting of federal and provincial ministers charged with managing the recent influx of asylum seekers in Montreal, Trudeau told reporters that security and immigration officials are getting a handle on the thousands of refugee claimants — most of them Haitian — who have streamed into the country from the United States since July.

And then he added one big condition to a now-famous Jan. 28, 2017, tweet that his critics have blamed for the fact that so many new arrivals believe Canada will be their future home.

“You will not be at an advantage if you choose to enter Canada irregularly. You must follow the rules and there are many,” Trudeau said.

The prime minister’s Twitter posting, shortly after U.S. President Donald Trump took office, was in response to a proposed travel ban in the United States on people from predominately Muslim countries.

“To those fleeing persecution, terror & war, Canadians will welcome you, regardless of your faith. Diversity is our strength,” the tweet reads.

But the tweet has since received a more liberal interpretation among asylum seekers and others who feel suddenly fearful living in Trump’s United States.

More than 7,000 people have crossed from the U.S. into Canada at a breach in the border in Quebec this year, though a wave that began in July appears to have slowed in recent days, Public Safety Minister Ralph Goodale said this week.

Speaking in Ottawa Wednesday, Conservative MP Michelle Rempel said Trudeau’s approach has also filled those people with “false hope” that if they can somehow get to Canada, they will be accepted with open arms.

“Our system now is in shambles, and I think a lot of this has to do with the messaging — the inconsistent messaging — that has been coming out of Justin Trudeau's personal communication shop,” she said.

On Thursday, Haiti-born Liberal MP Emmanuel Dubourg is flying to Miami to speak to media about the flood of people coming to Canada and to correct some of the misconceptions that may exist among members of Florida’s Haitian community.

But in this country too, the Liberal government is tweaking its message in an attempt to keep anti-immigrant sentiments at bay.

“For someone to successfully seek asylum it’s not about economic migration. It’s about vulnerability, exposure to torture or death, or being stateless people. If they are seeking asylum we’ll evaluate them on the basis of what it is to be a refugee or asylum seeker,” Trudeau said.

In addition to a camp capable of housing 1,200 people at the Lacolle border crossing in Quebec, federal officials have erected temporary emergency shelters in the Montreal area as well as another across the Quebec-Ontario border in Cornwall.

Processing and treatment times for security and admissibility checks for potential asylum seekers has also been increasing and Trudeau said the government would like to also fast-track work permits to refugee claimants who are otherwise reliant on financial assistance from the government.

The Liberal leader said he was conscious of walking a fine line in Canada when the U.S. and many countries in Europe have taken a decidedly harder line toward migrants sneaking across their borders.

“We will continue to defend the integrity of our immigration system and remain careful stewards of an extraordinarily precious asset in this 21st-century world, which is to have a population positively inclined toward immigrants, toward refugees, understanding that being welcoming and open is a source of strength.”