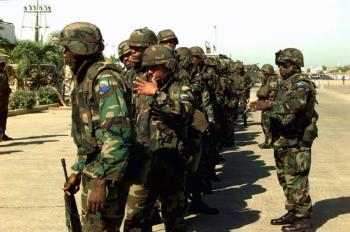 Canada is acting just like the junior imperial power it is in a part of the world this country has long considered its backyard.

Washington is asking Ottawa to lead a military mission to Haiti. The Canadian government in turn is leveraging its influence to get Caribbean countries to staff and sell a Haiti force.

Justin Trudeau would prefer to put a black face on his military intervention and Caribbean Community (CARICOM) troops are his preference. On Friday Canada’s prime minister said, “I’m so pleased that there is such an interest by the Caribbean countries to be part of any solution” in Haiti.

Trudeau has repeatedly met with CARICOM officials to discuss Haiti. On Tuesday the Jamaica Gleaner reported, “Prime Minister Justin Trudeau has, within a one-week period, held a second round of talks with Caribbean Community leaders on the rapidly deteriorating humanitarian and security situation in Haiti.”

The direct outreach to CARICOM is on top of a broader Canadian campaign which has included Caribbean leaders. Last month Trudeau hosted a meeting on Haiti at the United Nations headquarters in New York while Foreign Affairs Minister Melanie Joly held a gathering to discuss the embattled and poverty-racked Caribbean nation at the Organization of American States summit in Peru.

Bahamian Prime Minister Philip “Brave” Davis said he would send troops if CARICOM okayed the mission. “If CARICOM decides that the Haitian situation requires the deployment of security troops, then the Bahamas will abide by the outcome of the organization’s resolution,” he declared. Jamaica’s Information Minister Robert Morgan echoed that comment.

If Ottawa convinces CARICOM members to join its imperial endeavor it would highlight Canada’s leverage among the political and economic union of mostly small 15 member states. Ottawa’s influence in the region dates to when the Canada First Movement sought “a closer political connection” with the British West Indies in the 1870s.

By the early 1900s, Canadian policy supported annexing the British Empire’s Caribbean possessions (the various islands as well as today’s Belize and Guyana). At the end of the First World War, Ottawa asked the Imperial War Cabinet if it could take possession of the British West Indies as compensation for Canada’s defence of the empire. London balked.

Canada’s sizable financial sector drove these efforts. With their presence in the region dating to the 1830s, Canadian banks were major players by the latter stages of the century.

Canadian banks continue to be influential. After independence Canadian politicians, businessmen and Bank of Canada officials developed banking and taxation policies in a number of Caribbean countries.

The Caribbean Development Bank is a half-century old multilateral bank that provides Ottawa with influence over the region’s economy. Initially staffed by Canada and the UK, those two countries each control 9.31 percent of of the bank’s voting shares (down from 20 percent).

Canada has also played an important role militarily in the region. Canada cooperated closely with Jamaica in setting up its national security organizations after the country’s independence. Over the past half-century Ottawa has regularly trained Jamaica’s security forces and has a small military base on the island.

If Ottawa convinces CARICOM to send forces to Haiti it will reflect Canadian influence in the region. Imperial powers always want others to do their dirty work.