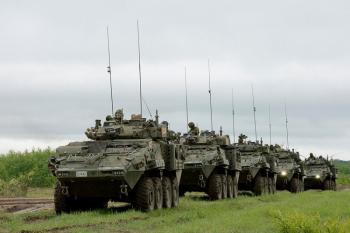 As many Canadians remain isolated in their homes due to the ongoing coronavirus pandemic, the Trudeau government quietly announced it was lifting its suspension of arms export permits to Saudi Arabia. It has also renegotiated the government’s $14 billion armoured vehicle deal with the belligerent and repressive monarchy.

The Liberals set the stage for this decision when a recent review found no evidence linking Canadian military exports to human rights violations committed by the Saudis. This assessment, completed by Global Affairs Canada, claimed there was no “credible” link between arms exports to the Saudis and human rights abuses. This came despite an April, 2016 memo to then foreign affairs minister Stéphane Dion that claimed the armoured vehicles would assist Riyadh in “countering instability in Yemen.”

Throughout their time in office the Liberals have largely paid lip service to the suffering of the Yemeni people. The five-year-long Saudi led war against Yemen, the poorest country in the Arab world, has left 100,000 dead. Today, more than 20 million people in Yemen need some kind of humanitarian assistance, and an estimated 18 million are food insecure.

Despite a great deal of public attention devoted to a diplomatic spat—after Riyadh withdrew its ambassador over an innocuous tweet from the Canadian Embassy in August, 2018—the Liberals have sought to mend relations and continue business as usual. In December, 2018 HMCS Regina assumed command of a 33-nation Combined Maritime Forces naval coalition patrolling parts of the Middle East from Saudi Arabia. Last September Foreign Minister Chrystia Freeland said, “Saudi Arabia is an important partner for Canada and we continue to work with Saudi Arabia on a number of different issues at a number of different levels.” For its part, the Canadian Embassy’s website continues to claim that “the Saudi government plays an important role in promoting regional peace and stability.”

According to an access to information request by PhD researcher Anthony Fenton, Freeland phoned new Saudi Foreign Minister Ibrahim Abdulaziz Al-Assaf in January, 2019. In briefing notes prepared to support the discussion, Freeland was encouraged to tell her counterpart that the Government of Canada “Appreciate[s] the hard work and heavy lifting by the Saudis and encourage[s] ongoing efforts in this regard.”

While the Trudeau government implemented a freeze on new export permit approvals, shipments of Canadian weaponry continued. 2018 set a record for Canadian rifle and armoured vehicle sales to the Saudis. Over $17 million in rifles were exported to the kingdom that year, and a similar amount were transferred in 2019. Canada also exported $2 billion worth of “tanks and other armoured fighting vehicles” to the Saudis in 2019.

The Global Affairs review that claimed there was no “credible” link between Canadian weapons exports to the Saudis and human rights abuses noted there were 48 arms export permit applications awaiting government approval.

As Fenton has documented in detail, armoured vehicles made by Canadian company Streit Group in the UAE have repeatedly been videoed in Yemen. Equipment from three other Canadian armoured vehicle makers—Terradyne, IAG Guardian and General Dynamics—was found with Saudi-backed forces in Yemen. Fenton has shown many examples of the Saudi-led coalition using Canadian-made rifles as well.

The Trudeau government’s arming of the Saudi monarchy while saying little about its brutal war in Yemen should be understood for what it is: an example of callous war profiteering that is enabling massive human rights abuses in one of the most vulnerable places on earth.