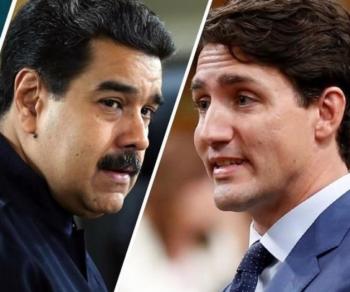 Canada’s Foreign Ministry accused Maduro and other targeted officials of being “responsible for, or complicit in, gross violations of internationally recognized human rights, have committed acts of significant corruption, or both”.

“Today’s announcement sends a clear message that Canada will take action against individuals who have profited from acts of significant corruption or who have been involved in gross violations of human rights,” Freeland said.

The Foreign Ministry did not, however, provide evidence to bolster its human rights and corruption allegations against the 19 officials.

The measures were authorized under Canada's newly approved Magnitsky Act, which was modelled on its controversial 2012 US predecessor that blacklisted Moscow officials allegedly linked to the 2009 death of lawyer Sergei Magnitsky in a Russian detention center. Thirty Russian officials and three South Sudanese government leaders have also been targetted.

The sanctions include “an asset freeze in Canada on all listed people, and render listed persons as inadmissible to Canada”.

According to the Foreign Ministry, these sanctions are “in addition to sanctions imposed on September 22, 2017”, in which 40 high-ranking Venezuelans were targeted.

Caracas has yet to respond to the move, though it has condemned previous rounds of sanctions as part of a US-led effort to promote regime change.

Over the past year, Canada has stepped up its pressure on the Maduro administration. In August, Ottawa joined a 12 nation bloc, known as the Lima Group, which has pushed for economic sanctions as well as an international arms embargo against Venezuela.

Last month, Canada hosted the second meeting of the Lima Group in Toronto where it urged regional governments to take steps to "further isolate" Venezuela.

With additional reporting by Lucas Koerner from Caracas.