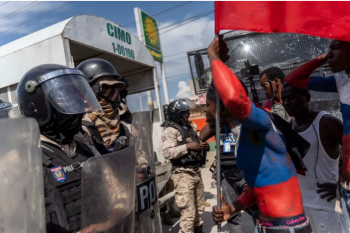 A protester confronts a member of Haitian security forces in October, as the country reeled from a cost-of-living crisis and violence from criminal gangs [Richard Pierrin / AFP]

Canadian military aircraft made the delivery to the Haitian National Police in the capital of Port-au-Prince on Wednesday, it added.

Haitian gangs seized control of much of the country since the 2021 assassination of President Jovenel Moise, leading to routine gun battles with police.

Canada and the United States provided tactical and armoured vehicles, as well as other supplies, in October after Haiti urged the international community to send in a “specialised armed force”. Ottawa has also sanctioned Haitians accused of gang ties, including a former president, two ex-prime ministers and three high-profile entrepreneurs.

Canadian Prime Minister Justin Trudeau told reporters in Mexico City on Wednesday that the sanctions and aid were “making a difference”.

“We’re all very aware that things could get worse in Haiti and that’s why Canada and partners, including the United States, are preparing various scenarios if it does start to get worse,” he said.

Canada will continue to provide support, Trudeau said, but he emphasised the Haitian crisis must be resolved domestically. Trudeau’s comments came as he attended the North American Leaders’ Summit along with US President Joe Biden and Mexican President Andres Manuel Lopez Obrador.

“What is particularly important in this situation is that the Haitian people themselves be at the centre of the support, the building of stability and the resolution of the crisis in Haiti right now,” Trudeau said.