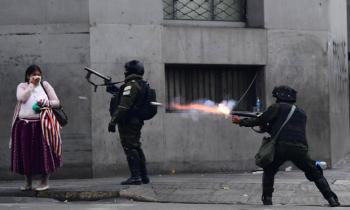 ‘There are also echoes from Bolivia’s past dictatorships.’ Photograph: Ronaldo Schemidt/AFP via Getty Images

The OAS final audit of the Bolivian elections, published on December 4, concludes that there was “intentional manipulation” and “serious irregularities” that make it impossible to verify the results of the election.[1] Members of the de facto government and other critics of former president Evo Morales have used the findings of the OAS audit to corroborate allegations of electoral fraud leveled in the hours and days following the vote. But the following analysis shows that the report itself presents a biased and misleading account of the audit’s findings, presenting serious inaccuracies and downplaying or ignoring altogether any evidence that runs counter to the fraud narrative that the OAS has promoted since the day after the election.

This analysis is not meant to serve as a validation of the electoral results themselves. Rather, it is an analysis of the OAS’s actual findings and of the neutrality and rigor of the audit itself. This is not about supporting one political party or candidate over another. Nor is it solely about Bolivia. This is about the need for independent electoral observation in the hemisphere, and about accountability for an organization that has abandoned any semblance of neutrality under the leadership of Secretary General Luis Almagro.

With the right-wing coup in Bolivia nearly complete, the junta is hunting down the last remaining dissidents

A brutal military junta that seized power from Bolivia’s democratically elected President Evo Morales is violently repressing a working-class indigenous-led uprising, and the country is rapidly falling under its control.

Soldiers in military fatigues prowl the streets, enforcing a series of choke points around the seat of power. Anyone perceived as standing against the status quo is now subject to being arrested on charges of sedition or terrorism. Dissident journalists and Morales sympathizers have been forced into hiding, leaving the house only when necessary.

“It’s a fascist dictatorship, there’s no hiding it,” says Federico Koba, a left-wing journalist who asked that I not use his real name for fear of arrest. “There are paramilitary agents going around the city taking pictures and pinpointing who’s who. Who is a leader, who is recording the protests, who is recording the repression.”

Anti-Indigenous Racism on the Rise in Post-Coup Bolivia (video)

President Evo Morales, as Bolivia's first indigenous president, introduced numerous changes to the country to benefit Latin America's largest indigenous population. The new coup government, however, is seeking to reverse all of these changes.

Is Bolivia turning into a rightwing military dictatorship?

Indian massacres have returned to Bolivia. There is a history — a blood feud, to be precise — behind this tragedy. The self-declared “presidency” of Jeanine Áñez has revived the old oligarchy’s race hatred and the barbaric practice of Indian killing, the collective punishment of the nation’s Indigenous majority for daring to defy a centuries-old racial order of apartheid and oppression. Since the ousting of Bolivia’s first Indigenous president Evo Morales, security forces have carried out at least two massacres of Indigenous people protesting the military coup.

Only two weeks since seizing state power, the evidence is clear: this is a rightwing, military dictatorship. The telltale sign for a country like Bolivia is the outright Indian killing.

On November 15, the army opened fire on a peaceful demonstration in Cochabamba, killing eight and wounding dozens more. On November 16, a day after the Cochabamba massacre, Áñez issued a decree exempting the police and military from criminal responsibility in operations for “the restoration of order and public stability.” A carte blanche to kill at will, security forces have obliged the directive with increasing cruelty.

Bolivia: Police demand to be paid for their support for coup

Bolivia's former President Evo Morales on Monday revealed an official document in which the commander of the police requires Jeanine Añez administration to meet the wage increase commitments that would have been acquired at the time of the police mutiny on November 8, an action which facilitated the consolidation of the coup d'etat.

The leaked document, which is a copy of an official note sent by Colonel Rodolfo Montero to the Interior Minister Arturo Murillo on November 25, refers to the “wage leveling proposal for police officers” who aspire to have their salaries and benefits  equated to those that the military are entitled to.

Besides having the official police seal, the letter is clearly signed by the officer who led the mutiny hours before President Morales was forced to resign.​​​​​​

This information similar to the data presented in a story that the Brazilian press leaked in mid-November, which is also related to the behavior of the Police and the Army during the coup.

Bolivia's social movements and former President Evo Morales support the new elections, but it's far from certain that they will be fair.

The democratically elected president of Bolivia, Evo Morales, the very first indigenous president of the Americas, has been forced, at gunpoint, to flee the country.  There have been on a 5-day stretch since October 20th, 23 deaths, 715 injured, total arrests of 1112 and the number of wounded are unknown (data from the Defensoría del Pueblo de La Paz). The victims are overwhelmingly indigenous people.

There is no excuse whatsoever for this violence, no excuse for the rupture of the constitutional process. No alleged, and unsubstantiated, “electoral irregularity”, no alleged ” political mistake” by Evo Morales can possibly excuse the police and military deposing a legitimately elected political leader. There are legal procedural means to deal with any of these occurrences, and indeed Evo Morales had already agreed to a ballot audit by the OAS and even to new elections. The Bolivian armed forces then acted against their own constitution and forced him to resign. His present term does not end until January.

Mexico and the new government elect of Argentina have been recognized as having saved the life of the president and the vice president, Alvaro Garcia Linera, who are now in forced exile in Mexico.

The coup has been carried out by known paramilitary leaders, right wing fanatics, who are consumed with racism against their own peoples. The self-proclaimed “president” Jeanine Añez, who took power without any election or backing of the Senate and Deputy Chambers is maintained solely by military support. Bolivia has therefore effectively been turned into a military dictatorship. She has violated articles 161, 169 and 410 of the Bolivian Constitution. She famously has made a racist remark by saying that the indigenous peoples should stay in the hills because the cities are not for them.

In fact of law, Evo Morales is the only true, legitimate president of Bolivia since his letter of resignation has not been approved by the Bolivian Senate. Moreover, nobody should take seriously a “resignation” made at gunpoint.

Letter to Minister Champagne Re: Condemning the military coup and respecting democracy in Bolivia

We are dismayed that the Canadian Federal government has chosen to support the interim leadership of Jeanine Áñez Chávez – a representative from a party that received only 4% of the vote in the latest October elections, and whose support is derived largely from the backing of the Bolivian police and military. We are also troubled given Áñez’s hostile and discriminatory anti-Indigenous remarks, especially in a country where more than half the population is Indigenous.

As Bolivia’s first Indigenous President, Morales made significant progressive economic and social policy changes that have resulted in strong economic growth, drastic reduction in rates of poverty and overall improvements of human rights. However, we have seen how actions of independent states with socialist policies often provoke the ire of corporate interests and Western countries such as the United States, which has a long history of Latin and South American government intervention and ousting democratically elected leaders by way of violent military coups.