Canada tries to use international law to support imperialism 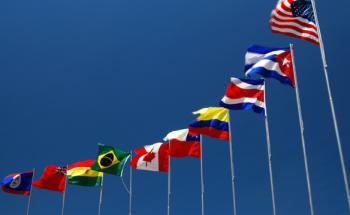 Like the shopkeeper in the Monty Python dead parrot sketch who insists a deceased bird is actually alive, imperialist aggression against Venezuela is turned into promotion of the “international rules-based order”.

At the opening of the UN assembly in September Justin Trudeau said the International Criminal Court is a “useful and important way of promoting an international rules-based order.” Simultaneously, Canada announced it (with five South American nations) would ask the ICC to investigate the Venezuelan government, which is the first time a government has been formally brought before the tribunal by another member.

Liberal officials and the sycophantic media portrayed Canada’s move to bring Caracas before the ICC as a challenge to the US. Evan Dyer reported, “Government sources told CBC that Canada’s decision to refer Venezuela is also meant as a show of support for the ICC, an institution this country believes in that is under attack” from the Trump administration. In other words, Ottawa will challenge Washington by showing Trump how the “international rules-based” ICC can undermine a government the US and Canada are seeking to overthrow through unilateral sanctions, support for the opposition and threatening an invasion, which all contravene the UN Charter.

Unfortunately, some people are willing to buy a dead bird for a pet, the proof of which is that the “international rules-based” ICC Trudeau is promoting has previously been employed to enable violations of international law. In 2011 ICC chief prosecutor Luis Moreno-Ocampo helped set the stage for NATO’s war on Libya, which contravened UN resolutions 1970 and 1973. (Ottawa defied the UN Security Council resolutions authorizing a no-fly zone to protect Libyan civilians by dispatching ground forces, delivering weaponry to the opposition and bombing in service of regime change.) Moreno-Ocampo’s immediate condemnation of Gaddafi helped justify NATO violence. Amidst NATO’s violation of UN Security Council resolution 1973, Ocampo issued arrest warrants  for Gaddafi, his son Saif al-Islam and Libyan intelligence chief Abdullah al-Senussi. These charges for crimes against humanity were used to justify  regime change efforts. At the time Moreno-Ocampo echoed the outlandish claim that Gaddafi distributed Viagra to his troops “to enhance  the possibility to rape”. Three months into the bombing campaign, Moreno-Ocampo told a press conference: “we have information that there was a policy to rape in Libya those who were against the government. Apparently he [Gaddafi] used it to punish people.”(Amnesty International’s senior crisis response adviser Donatella Rovera, who was in Libya for three months after the start of the uprising and Liesel Gerntholtz, head of women’s rights at Human Rights Watch, were unable to find any basis for the mass rape claims.)

A 2017 Der Spiegel English investigation titled “The Ocampo Affair A Former ICC Chief’s Dubious Links” notes, “Ocampo’s correspondence shows that he made agreements with the French and the British, and behaved as part of the anti-Gadhafi coalition.”

A forerunner to the ICC, the Canadian-backed International Criminal Tribunal for the former Yugoslavia (ICTY) helped justify NATO’s illegal 78-day bombing of Serbia. While the worst atrocities of the Yugoslav wars took place in the early 1990s, ICTY Chief Prosecutor Louise Arbour hastily prepared to prosecute Serb President Slobodan Milosevic for rights violations at the start of 1999. Just prior to the NATO bombing Arbour brought along the international media for a stunt where she claimed Milosevic was blocking her from investigating a massacre in the Kosovar village of Racak. Subsequent investigations into what happened at Racak were inconclusive despite widespread reporting of a Serbian massacre, which was used to justify NATO’s illegal bombing.

The idea that bringing Venezuela to the ICC will strengthen the “international rules-based order” would be funny if it wasn’t an escalation in a dangerous campaign to oust an elected government.