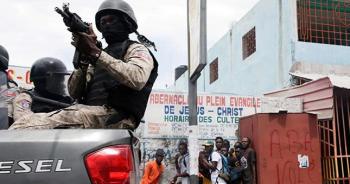 The Canadian government has warned travelers to Haiti that police in the country are using live ammunition to disperse crowds. It called the protests "violent" and says there is widespread civil unrest taking place in the country since September 2, 2019.

The safety and security update by the country, in part, reads:

Burning barricades are disrupting traffic in the main streets of Port-au-Prince. Clashes between protestors and security forces have occurred. Police have used tear gas and live ammunition to disperse crowds.

Additional protests are expected over the next few days. Acts of violence could happen without notice.

Avoid all unnecessary travel to Haiti. If you are in the country:

Canada is part of a U.S. led group of diplomats in Haiti that are decried by the Haitian population for its support of President Jovenel Moïse.

Despite an overwhelming majority calling for the president's resignation, the support of the small minority of diplomats in Haiti keep President Moïse in power.

Canadian citizens in recent weeks have been protesting for the government of Prime Minister Justin Trudeau to cut ties with the regime in Haiti.