Canada’s alliances prove the country is an imperialist power 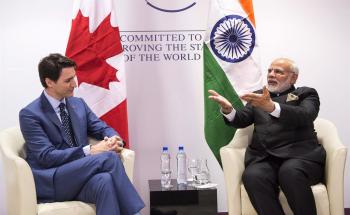 For thousands of years folk wisdom has insisted that ‘you shall be known by the company you keep’. This is also true of countries.

A recent United Nations vote condemning the “glorification of Nazism, neo‑Nazism and other practices that contribute to fuelling contemporary forms of racism, racial discrimination, xenophobia and related intolerance” generated significant commentary on social media. The US and Ukraine voted against the widely supported resolution while Canada, Australia, New Zealand and most European countries abstained. One commentator tweeted that the countries who failed to condemn Nazism were “more or less the same coalition of stooges that recognized Juan Guaido” as president of Venezuela while another pointed out that it was similar to the coalition of “countries condemning China's policies in Hong Kong.” Another connected it to NATO.

These commentators hit on something fundamentally important. It is instructive to consider Canada’s UN votes and position on international issues through the lens of its many alliances.

Canada is a leading member of North Atlantic Treaty Organization (NATO). Canada participated with the US and Britain in the secret talks on creating a north Atlantic alliance and since NATO was established in 1949 has been one of its most active contributors.

Canada is a member of the “Five Eyes” intelligence-sharing arrangement. A series of post-Second World War accords, beginning with the 1946 UKUSA intelligence agreement, created the “AUS/CAN/NZ/UK/US EYES ONLY” arrangement. The Five Eyes partnership oozes of white supremacy. Settler colonialism and empire unite an alliance that excludes wealthier non-white nations (Japan and South Korea) or those with more English speakers (India and Nigeria). It’s not a coincidence that the only four countries that originally voted against the United Nations Declaration on the Rights of Indigenous Peoples (UNDRIP) in 2007 are part of the Five Eyes.

Canada is a member of the Group of Seven (G7) wealthy nations. It also has a permanent (constituency-based) seat on the International Monetary Fund’s executive board (Canada represents 10 Caribbean countries and Ireland on the IMF board).

Canada is part of the Lima Group seeking to overthrow the Venezuelan government. Instigated by Canada and Peru in mid 2017, the Lima Group has successfully corralled regional support for the US-led campaign to oust President Nicolas Maduro.

While formally established two months after the 2004 US, France and Canada coup against President Jean–Bertrand Aristide, Radio Canada’s Enquête pointed out that the Core Group was actually spawned at the “Ottawa initiative on Haiti”. Held at the Meech Lake Government Resort on January 31 and February 1, 2003, no Haitian officials were invited to the private gathering where US, French, OAS and Canadian officials discussed overthrowing Haiti’s elected government, putting the country under UN trusteeship and recreating the Haitian military.

Few countries are represented in as many powerful and openly interventionist coalitions. Canada’s different alliances suggests this country sits near the centre of global imperialism.