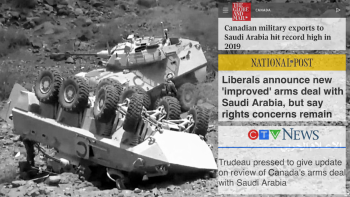 For six years, Yemen has been devastated by a civil war between Saudi-led coalitions and Houthi rebel fighters with devastating humanitarian consequences. The EU has called it the ‘worst humanitarian crisis in the world’ while the UN stated it was ‘entirely man-made.’

In short: Canada’s recent renewal of a $15 billion combat vehicle contract with Saudi Arabia raises questions over its complicity in the Yemen humanitarian crisis.

History of the Conflict:

The civil war in Yemen has its roots in the 2011 Arab Spring uprising. A failed leadership transition and territorial gains by the Houthi rebel movement sparked a civil war.

Yemen: The worst humanitarian crisis in the world

Millions in Aid, Billions in Arms Money: It has expressed humanitarian concerns for Yemeni civilians while simultaneously supplying weapons to the conflict.

The Saudi Arms Deal: In 2014, Canada concluded a deal with Saudi Arabia for the purchase of $15 billion worth of military equipment, including 928 light armoured vehicles.

Despite this, a Global Affairs Canada report showed record sales of military hardware in 2019, despite a moratorium on arms exports to Saudi Arabia in response to Kashoggi’s murder.

Canada justified its refusal to cancel the LAV contract by citing billions of dollars in damages and job losses.

The bottom line: Canada’s renegotiated deal to supply the Saudis with arms poses questions about its complicity in the deepening humanitarian crisis in Yemen. It has been accused of hypocrisy by donating millions in aid to Yemen while drawing billions in revenues from weapons sales to Saudi Arabia. While the current government was presented with multiple opportunities to exit these agreements, it prioritized financial gain over ending human rights abuses.