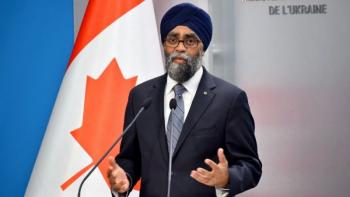 While Sajjan’s responsibility for NATO and military spending are straightforward, his role in fueling the Saudi led war in Yemen is less obvious. But, the Department of National Defence (DND) plays a substantial role in Canadian arms exports to Saudi Arabia and elsewhere.

As he did the last three years, Sajjan is set to speak at the CANSEC arms bazar in Ottawa later this month. For more than two decades the annual Canadian Association of Defence and Security Industries (CADSI) conference has brought together representatives of arms companies, DND, Canadian Forces (CF), various other arms of the federal government and dozens of foreign governments. In 2018 more than 11,000 people attended the two-day conference, including 16 MPs and senators and many generals and admirals.

The corporation supplying Saudi Arabia with more than $10 billion in Light Armoured Vehicles produces the same LAVs for the CF. In a 2012 Canadian Military History article Frank Maas writes, “the CF has continued to purchase LAVs because they have been successful in the field, and they support a domestic producer, General Dynamics Land Systems Canada (GDLS-C), that cooperates closely with the military.” GDLS’ London, Ontario, operations exist largely because of interventionist military industrial policy. A 2013 Federal government report on “Leveraging Defence Procurement Through Key Industrial Capabilities” lists GDLS as one of three “Canadian Defence Industry Success Stories.”

Beyond contracts, subsidies and various other forms of support to Canadian weapons makers, DND has long promoted arms exports. Its website highlights different forms of support to arms exporters. “Learn how the Department of National Defence can assist in connecting Canadian industry to foreign markets”, explains one section. Another notes: “Learn how the Department of National Defence keeps Canadian companies informed of business opportunities at the North Atlantic Treaty Organization (NATO).”

Representatives of DND often talk up Canadian military equipment as part of delegations to international arms fairs such as the UK’s Defence Security and Equipment International exhibition. According to a FrontLine Defence story titled “Representing Canada in the UAE IDEX”, representatives of DND helped 50 Canadian arms companies flog their wares at the Abu Dhabi-based International Defence Exhibition and Conference (IDEX) in February. To help the companies move their wares at the largest arms fair in the Middle East, Commander of the Bahrain-based Combined Task Force 150, Commodore Darren Garnier, led a Canadian military delegation to IDEX.

International ports visits by naval frigates are sometimes designed to spur arms sales. Lieutenant Bruce Fenton writes, “Canadian warships can serve as venues for trade initiatives, as examples of Canadian technology, and as visible symbols of Canadian interest in a country or region. In countries where relationships are built over time, as is the case with many Asian and Middle Eastern countries, a visit by a Canadian warship can be an important part of a dialogue that can lead to commercial opportunities for Canadian industry.”

To get a sense of the interaction between the various components of the military industrial complex, the FrontLine Defence story detailing Canada’s participation in IDEX was written by Brett Boudreau. His byline notes that he “is a retired CAF Colonel, a Fellow with the Canadian Global Affairs Institute, and former Director of Marketing and Communications at CADSI.” Boudreau’s trajectory — from the CF, to arms industry spokesperson, to militarist think tank, to writing for a militarist publication — is a stark example of one individual moving through the various components of the military industrial complex. But Boudreau is not unique. It is common for retired CF and DND officials to take up arms industry posts, including senior positions. It wouldn’t be surprising if Sajjan ended up on the board of an arms company after he leaves politics.

Harjit Sajjan heads a ministry intimately tied to a globally oriented corporate weapons industry that profits from war. Is this something Canadians understand and support? Or would the majority of us be upset to learn their Minister of Defence is an arms pusher, promoting sales to anti-democratic, repressive regimes?

Yves Engler has been dubbed “one of the most important voices on the Canadian Left today” (Briarpatch), “in the mould of I.F. Stone” (Globe and Mail), and “part of that rare but growing group of social critics unafraid to confront Canada’s self-satisfied myths” (Quill & Quire).He has published nine books.