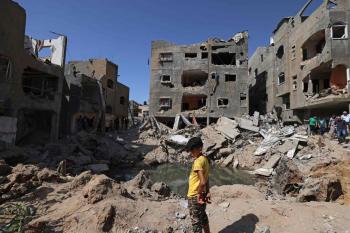 In his recent memoirs, Barack Obama recalled a revealing exchange about American policy toward the Israeli occupation that he had with Ben Rhodes, one of his security advisers. Rhodes had rushed in late for a meeting in the Oval Office, and explained to Obama that he just gotten off a lengthy phone call with a highly agitated liberal Democratic congressman.

“He does,” replied Rhodes. “He also opposes us doing anything to actually stop settlements.”

In a nutshell, this anecdote also epitomizes Canada’s position on the 54-year-old Israeli occupation.

Our official foreign policy formula on the Israeli occupation of Palestine, first proclaimed in the 1990s, states that Canada does not recognize Israel’s unilateral annexation of East Jerusalem, nor Israel’s permanent control over the Arab territories occupied in 1967. The formula recognizes Israel’s right to security and the Palestinian right to self-determination.

Taken together, this Canadian formula should set the stage for a robust critique of Israel’s conduct, as its calcifying occupation has become indistinguishable from annexation in the West Bank and its comprehensive blockade of Gaza since 2007 has resulted, according to the United Nations, in collective punishment and an unliveable reality.

Yet, when measured against Canada’s refusal to vote for resolutions at the United Nations General Assembly opposing the occupation, its opposition to war crimes investigations at the International Criminal Court, its unwillingness to insist even upon minimal international human rights standards when it renegotiated the Canada-Israel Free Trade Agreement in 2018 and its diplomatic laryngitis after Israel announced its plans to annex significant parts of the West Bank in 2020, our government has found itself holding back the arc of justice.

During the past weeks, the latest cycle of violence resulted in more than 220 Palestinian deaths and 10 Israeli deaths, and immense destruction in Gaza. Canada’s official statements became slightly sharper — “appalled by the ongoing violence”; “grave concerns” — but still avoided any direct criticism of Israel’s conduct of its latest war, let alone the source of the war: its harsh 54-year-old occupation, the longest in the modern world. You will not find any official statements by Canada in recent years which use the term “occupation,” thereby dimming the spotlight on Israel’s responsibilities.

Perhaps the biggest hole at the heart of Canada’s faux policy toward the Israeli occupation is our government’s inexplicable stance toward the 250 Israeli settlements in East Jerusalem and the West Bank. Our official Canadian policy regards the Israeli settlements to be not only a violation of the Fourth Geneva Convention, but also to constitute a serious obstacle to a just and lasting peace.

Indeed, the profound illegality of the Israeli settlements is one of the most widely accepted points of agreement among diplomats and legal scholars. Under both international and Canadian criminal law, the settlements are a presumptive war crime.

Yet, Canada’s free-trade agreement with Israel expressly allows settlement goods to enter our marketplace tariff-free. Israeli settlement wineries in the occupied Palestinian territory sell their vintages in Canada with the label “Product of Israel.” When a concerned Jewish Canadian professor challenged this labelling in the Federal Court, the Canadian government took the side of the settlement wineries.

This tepid Canadian policy toward the Israeli occupation belies not only our stated commitment to a rules-based international order — it also damages our international standing. In June 2020, Canada lost its bid for a rotating seat on the United Nations Security Council to two small European countries — Norway and Ireland — that lacked Canada’s stature as a member of the G7, G20 and Trans-Pacific Partnership, but whose strengths included a much more principled position on the Israeli occupation of Palestine.

The path to a just and durable peace is not through realpolitik, which has allowed Israel to negotiate from the strength of its many illegal “facts on the ground,” but through a rights-based framework. Unless Canada is prepared to impose accountability measures on Israel to end the occupation, it is folly to expect any change to the terrible status quo between Israel and Palestine.

Michael Lynk is an associate professor of law at Western University, and the UN Special Rapporteur for the situation of human rights in the Palestinian Territory that has been occupied since 1967.