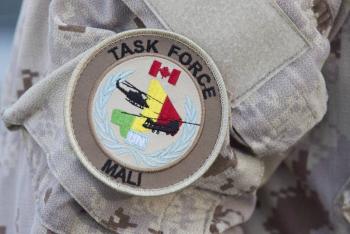 The UN Mali patch is shown on a Canadian forces member’s uniform in this June, 2018 file photo. - Lars Hagberg - The Canadian Press

There was a news story last week about Canada’s United Nations peacekeeping mission to Mali wherein an internal UN report noted that the violence level in that war-torn African nation has actually increased since Canadian troops first deployed in August.

Now probably even the most self-delusional of Canada’s defence pundits would have realized that the comparative handful of troops and equipment that we have committed — four Chinook heavy lift helicopters, four Griffon utility helicopters and about 250 personnel — were going to tip the balance in Mali as soon as they arrived on the ground.

This flareup of violence in Mali ignited in 2012 and the UN stood up the Multidimensional Integrated Stabilization Mission in Mali (MINUSMA) in 2013. There are 56 nations contributing nearly 15,500 personnel to this peacekeeping mission, which is considered the most dangerous of all current UN operations.

Given that Canada’s military role in this complex conflict — with its core issues of dispute dating back centuries — is simply to provide medical evacuations for the UN force, means that no one should expect our contribution to affect either the tactical or strategic outlook in Mali.

What Canada’s one-year, $400 million commitment to Mali does achieve is a high profile, relatively low risk demonstration of the Trudeau Liberal government’s promise to return our nation to the good old days of peacekeeping in blue helmets, under the UN flag.

On a more practical note, it could be said that Canada has a vested interest in protecting Canadian mining assets in Mali. There are over 70 Canadian companies currently involved in extracting Malian gold, the largest of which being a firm called Iamgold.

The revenue from Mali’s gold production represents roughly eight per cent of that country’s impoverished economy. The Malian government is partnered with the international mining companies and they receive about 18 per cent of the gross revenue. When you factor in infrastructure and labour costs disbursed in Mali and the actual extraction of this valuable commodity, about 40 per cent of all revenue remains in the country. That means that 60 per cent of Mali’s gold returns, or 4.8 per cent of that nation’s GDP, flow out as profit for the international mining companies and their investors. In the case of Iamgold, its two shared mine holdings produce roughly half of all Mali’s gold annually.

Coincidently, investors in Iamgold include both of Canada’s public pension funds.

This means that essentially every Canadian will benefit from maintaining the status quo in Mali, so long as it secures these lucrative mining interests.

The idea that Canada is sucking profits out of a struggling Third World country in Africa is certainly not how this mission is being billed.

On the contrary, we are being led to believe that this is part of some altruistic effort to bring peace and stability to a poor African nation that could use a helping hand.

On the domestic front, Trudeau and the Liberals can point to the 250 blue helmets shining under the Malian sun and proclaim their 2015 election promise of a ‘return to peacekeeping’ to have been fulfilled (just in time to enter the 2019 election campaign).

Sending troops to Africa with the purpose of securing mining profits from the exploitation of the nation’s natural resource (and to shore up our government coffers in the form of public pension funds) sounds so much more like modern colonialism.