Canada's Parliament and its Genocide Propaganda 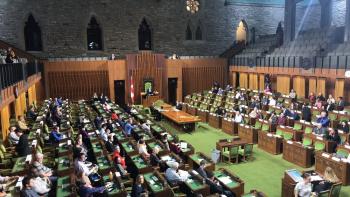 The Canadian parliament has brought Canada into further disrepute on April 17, 2022 by condemning Russia for “genocide”, thereby supporting the illegitimate Nazi-oriented Ukrainian Maidan regime and its crimes against current and former Ukrainian citizens.

One would think that it was bad enough that Canada has itself been condemned, around the world, for committing genocide against its native nations and peoples. Or that it was bad enough that it has been condemned for its aggression and war crimes in the three month bombing of Yugoslavia in 1999, during which China was attacked directly with the bombing of its embassy in Belgrade. Nor can we forget the condemnation of Canada’s invasion, occupation and destruction of Afghanistan, its assistance to the USA in its invasion of Iraq, its attempts to overthrow the government of Venezuela, of overthrowing  President Aristide of Haiti in 2004, of the murder of  60,000 Libyans in the brutal bombing and invasion of Libya in 2011, harassing China at every step and supporting Nazis and their war crimes against the peoples of the Donbass in Ukraine since 2014. We can go on, but the point is made.

Heather MacPherson, the New Democratic Party MP from Alberta, brought the motion in Parliament to condemn Russia for “genocide” in its military operations in Ukraine. McPherson is always ready to assist the Americans in their attempt to dominate the world. She made similar allegations against China regarding the Uighurs based on “evidence” produced by CIA-front, National Endowment for Democracy funded groups, and other US government funded organizations.

There was no debate required in Parliament about the Russian “genocide” vote, since there was unanimous support for it, before the vote was taken. And so it was; not a single voice of reason, of justice, raised any objection, or asked any question about the failure to produce evidence of her claims, the legal justification for them, or the hypocrisy of the exercise.

Canada claims it is supporting ‘democracy” in Ukraine, but the first action of the puppet regime that NATO installed in 2014 was to ban several opposition parties. Parties that had anything favourable to say about Russia was banned, including the Communist Party that in the last election before the coup, received close to 20 per cent of the vote. Its cadres were arrested, beaten, murdered, buildings attacked, and made illegal. We remember that the first political party that Hitler attacked when he came to power was the large and popular German Communist Party, making it illegal, and sending millions of its members to concentration camps and death.

The situation has gotten worse so that now there is only a single party permitted in Ukraine, Zelensky’s party which imposed martial law on the nation this year.

There is no point it discussing the examples the Canadian MP referred to in presenting her motion; it was just a litany of false claims, most already disproved, and none of which could amount to genocide under any legal definition.  She even (at 2:27 in the clip) admitted this when a reporter for one of the mass media pointed out that the American government has refused to condemn Russia for genocide as there is not sufficient and reliable evidence of such actions and none of intent which is required to found such a charge.  But, she stated, again displaying her motion was meant as a propaganda exercise against Russia, that she knew that but that “someone had to take action.” In other words, the Americans know they could not make such a claim and have any credibility so they got their flunkies in Canada to do it along with their flunkies in Latvia, who soon followed suit.

She then added that Canada should send more money to the International Criminal Court so that the prosecutor there would take action, not seeming to blush at the fact she was really calling for offering a bribe to the ICC prosecutor for his cooperation. But then again, Canada’s government and parliamentarians are used to trying to control prosecutions and trials at tribunals as they did at the ICTY and ICTR, both of which were essentially NATO tribunals designed to fix blame on scapegoats for the crimes of the western nations involved in those wars.

Canada has plenty to be worried about. Its complicity in the crimes of the Ukrainian Maidan regime against the Donbass peoples make its entire leadership liable to prosecution for war crimes and genocide. Canada has turned more than a blind eye to Ukrainian crimes which began when the peoples of the former eastern provinces of Ukraine refused to accept the NATO imposed coup regime. It was put in power through force and illegally, and immediately began to suppress all things Russia in a very Russian nation. Language was suppressed, free speech, freedom of association, purges took place, people were arrested, murdered, disappeared. Many journals were banned. TV and radio stations were shut down. So the peoples of the east rose up. They defied the Ukrainian Maidan regime by refusing to recognise it and declared themselves autonomous regions.

The Ukrainian Maidan regime and their NATO controllers did not attempt to find a peaceful resolution of this impasse. The Donbass peoples were immediately besieged by the Ukrainian Maidan regime’s armed forces including Nazi brigades who committed unspeakable crimes in Odessa and other places. This includes burning people alive, shelling civilians with rockets and artillery, cutting off water supplies, and food, multiple assassinations of their leaders, forcing Russia to assist with humanitarian relief while Canada did nothing to stop these crimes, but instead supported them by training the Kiev forces and assisting them in their attacks on the Ukrainians of the Donbass.

When Russia, Germany, France and the Ukrainian Maidan regime finally agreed on a mechanism in 2015 to stop the siege and work out a resolution of the issues, known as the Minsk Agreements, Canada did nothing to push Ukraine to comply with its commitments under the Agreements. Instead it continued to supply weapons and training to Nazi battalions such as the Azov brigade that has finally been destroyed in the fighting in Mariupol, whose survivors will likely face war crimes trials for their crimes.

The embarrassment can get much worse if strong reports of the capture of a Canadian general at Mariupol, along with an American general, are true. Their presence would indicate Russia was correct in claiming that it acted to forestall a massive offensive against the Donbass and on into Russia, as both generals are experts in armoured and infantry warfare.

The Canadian parliament is supposed to be a place for questions and debate. On questions of war and peace that function is even more important. Yet Canadians are being led towards a totally unnecessary world war by unscrupulous people and fools who are ever ready to dance to the drums of war. It matters not if it is with Russia, with China, or whoever else the masters of war in Washington dictate.

NATO countries care nothing for morality, and they care nothing for international law. Their “sanctions” are all illegal under international law. Their wars have all been illegal. It matters not at all to them. They aren’t part of the world that respects and follows international law, the UN Charter. They are part of the American “rules based order” whose primary rules are, “obey the diktats of the United States”, and, “disregard all international law.” There do not seem to be any other rules in the “rules-based order.” Neither the Americans nor anyone else has ever set out what the rules are, but based on their actions, they seem to be the only two rules that exist for them.

The Canadian working class, is trapped in a world order based on the rules of Western elites, partially enforced by the military alliance, NATO. NATO’s existence is itself illegal under the UN Charter. Yet, efforts to have Sweden and Finland join the alliance are in motion.

Christopher Black is an international criminal lawyer based in Toronto. He is known for a number of high-profile war crimes cases and recently published his novel Beneath the Clouds. He writes essays on international law, politics and world events, especially for the online magazine “New Eastern Outlook”.