Canada’s Security Council defeat is a win for Palestine 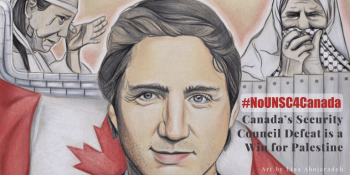 Canada’s defeat in its bid for a seat on the United Nations Security Council is a major victory for Palestinian solidarity. It also puts Canada’s Israel lobby on the defensive.

Israeli politicians and commentators have begun to publicly bemoan the loss. Israel’s ambassador to the UN, Danny Danon, told the Jerusalem Post, “we are disappointed that Canada didn’t make it, both because we have close ties with the country and because of the campaign that the Palestinians ran against Canada.” In another story in that paper headlined “With annexation looming, Canada’s UNSC upset is bad news for Israel, US” Deputy Managing Editor Tovah Lazaroff labels Canada’s loss “a sharp reminder of the type of diplomatic price tag Israel’s allies can suffer on the international stage.”

Inside Canada the Security Council defeat is a blow to the Israel lobby. While the Canadian media has generally minimized the impact Canada’s anti-Palestinian position had on the vote, the subject is being raised. In a Journal de Québec column titled “Why did Canada suffer a humiliating defeat at the UN?” Norman Lester writes, “it is the support of the Trudeau Liberal government for Israel, like that of Harper before him, that is probably the main reason for Ottawa’s two successive setbacks. Ireland and Norway have more balanced policies in the Israeli-Palestinian conflict than Canada.” He concludes the article by noting, “Canada has no chance of returning to the Security Council in the foreseeable future unless there is a radical change in its position regarding the Israeli-Palestinian conflict.”

By acquiescing almost entirely to the ‘Israel no matter what’ outlook of the Centre for Israel and Jewish Affairs and B’nai B’rith, the Trudeau government undercut its bid for a seat on the UN’s highest decision-making body. The Israel lobby’s point people in the Liberal caucus, Anthony Housefather and Michael Levitt, are no doubt hoping to avoid too much blowback for their role in this embarrassment. Housefather ought to be prodded on his contribution to the Trudeau government’s anti-Palestinian voting record at the UN since he repeatedly boasted that it was more pro-Israel than Stephen Harper’s.

Canada’s voting record at the UN was at the heart of the grassroots No Canada on the UN Security Council campaign. An open letter launching the campaign from the Canadian Foreign Policy Institute noted, “since coming to power the Trudeau government has voted against more than fifty UN resolutions upholding Palestinian rights backed by the overwhelming majority of member states.” A subsequent open letter was signed by over 100 civil society groups and dozens of prominent individuals urging countries to vote against Canada’s bid for a Security Council seat due to its anti-Palestinian positions. That letter organized by Just Peace Advocates stated, “the Canadian government for at least a decade and a half has consistently isolated itself against world opinion on Palestinian rights at the UN. … Continuing this pattern, Canada ‘sided with Israel by voting No’ on most UN votes on the Question of Palestine in December. Three of these were Canada’s votes on Palestinian Refugees, on UNRWA and on illegal settlements, each distinguishing Canada as in direct opposition to the ‘Yes’ votes of Ireland and Norway.”

Just Peace Advocates organized 1,300 individuals to email all UN ambassadors asking them to vote for Ireland and Norway instead of Canada for the Security Council. In a sign of the campaign’s impact, Canada’s permanent representative to the UN Marc André Blanchard responded with a letter to all UN ambassadors defending Canada’s policy on Palestinian rights.

Not only has Canada’s voting record on Palestinian rights undercut its standing within the General Assembly, the Canadian public doesn’t want the government pursuing anti-Palestinian positions. A recent Ekos poll found that 74% of Canadians wanted Ottawa to express opposition to Israel’s plan to formally annex a large swath of the West Bank with 42% of the public desiring some form of economic and/or diplomatic sanction against Israel if it moves forward with annexation. “The Trudeau government has not only isolated Canada from international opinion regarding Palestinian rights at the UN, but its positions contravene the wishes of most Canadians regarding the long-beleaguered Palestinians,” explained Karen Rodman of Just Peace Advocates.

While the impact of the loss shouldn’t be exaggerated, Justin Trudeau’s brand is linked to the idea that he is liked internationally. Additionally, the Liberals’ base supports the UN and the international body is closely connected with how they market their foreign policy.

Kowtowing to CIJA, B’nai B’rith and Israeli nationalists such as Housefather, Levitt, etc. on Palestinian rights at the UN helped scuttle Canada’s Security Council bid — that’s a fact Trudeau and the Liberals must face. More important, the international community’s rejection of a government enthralled to the Israel lobby weakens Israel diplomatically and is a victory for Palestine solidarity.